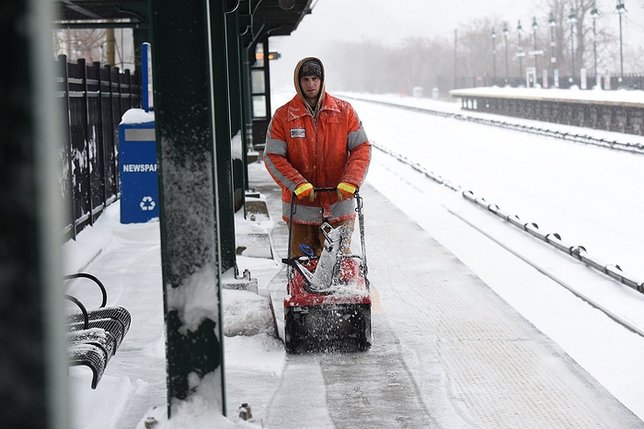 New York, NY - March 14, 2017 - Governor Andrew M. Cuomo today announced that MTA above-ground subway and limited Metro-North service will be restored on Tuesday evening at 6 p.m. At this time, Staten Island Railway service has been fully restored and express subway service will begin Wednesday by 7 a.m. or earlier on all lines.

Metro-North will resume limited hourly service starting at 6 p.m. tonight until 11 p.m. on the Hudson, Harlem and New Haven Lines, although there will be no branch service. The Hudson branch will run to Croton-Harmon only; the Harlem line runs to North White Plains; and the New Haven line ends at Union Station tonight. Full service will resume Wednesday morning per the regular weekday schedule and all customers will be served within five minutes of their normal departure time.

“As the severity of weather conditions decrease, we are restoring MTA above-ground subway and limited Metro North service so New Yorkers can resume their routines,” Governor Cuomo said. “The state is responding quickly to changing weather conditions, and we encourage New Yorkers to stay home where possible and continue exercising caution as we ride out the storm.”

The Governor also announced today a full travel ban on I-84 from the Pennsylvania border to the Connecticut border, as well as a tractor trailer ban on I-87 between Albany and the Canadian border, which went into effect at 1 p.m. Only emergency personnel, first responders, and other critical healthcare personnel will be permitted on the roadway. A temporary tractor trailer ban still remains in effect on I-81, I-84, I-86/Route 17, I-88 and on all of the New York State Thruway. The full travel ban for all of Broome County announced earlier today remains in effect. More information is available here.​

Capital District, Eastern Mohawk Valley & Upper Hudson Valley
Snow accumulations of 18 to 24 inches is possible. Current on the ground snow reports range from 8 to 12 inches. Most of the area today cloudy skies are forecast with scattered snow showers. Heavy snow showers likely after 7:00 a.m. Winds will be out of the north at 7 to 18 mph. Temperatures will be in the low 20s with a high near 26. Areas of dense freezing fog after 9:00 a.m. Areas of blowing snow after 3:00 p.m. The snow could be heavy at times with areas of blowing snow. Winds will be out of the east at 14 to 16 mph. Wind chill value as low as -5.

Lower Hudson Valley, NYC & Long Island
Accumulations potentially as high as 24 inches north of New York City. Current on the ground snow reports range from 4 to 12 inches. Temperature high in the upper 20s. Winds northeast 25 to 35 mph, with wind gusts as high as 50 mph. Tonight, cloudy, snow and freezing drizzle before 10:00 p.m., with a change of snow between 10:00 p.m. and 3:00 a.m. along with areas of blowing snow before midnight. Wind chill values between 10 to 15 degrees. Wind gusts as high as 33 mph. There is little or no ice accumulation expected. Wednesday, mostly cloudy with a high near 30. Scattered snow showers, mostly after 11:00 a.m. Wind chill between 10 and 15. Northwest winds 10 to 16 mph.

Western and Northwestern New York
Snow accumulations of 10 to 16 inches is possible. Current on the ground snow reports range from 1 to 4 inches. Winds will be from the north at 16 to 20 mph. The snow could be heavy at times with areas of blowing snow after noon. Temperatures in the high teens low 20s. For most of the area tonight mostly cloudy skies are expected with snow showers. New snow accumulation of 10 to 16 inches possible in the Rochester, Oswego and Thruway corridor.  A possible 10 to 16 inches expected in the city of Buffalo. Temperatures in the low teens around 12. Winds for the northwest around 18 mph with gusts as high as 28 mph. Tomorrow forecast expected snow showers. Areas of blowing snow. Winds from the northwest at 16 to 22 mph with gusts as a high as 33 mph.

Northeastern New York
Snow accumulations of 8 to 24 inches is possible. Current on the ground snow reports range from 1 to 3 inches. Temperature high 20 degrees, low 5 to 15 degrees. Winds are northwest around 16 mph, with wind gusts as high as 32 mph. Snow totals of 8 to 12 inches in St. Lawrence,  18 to 24 inches expected in Central Franklin, Clinton and Essex counties.