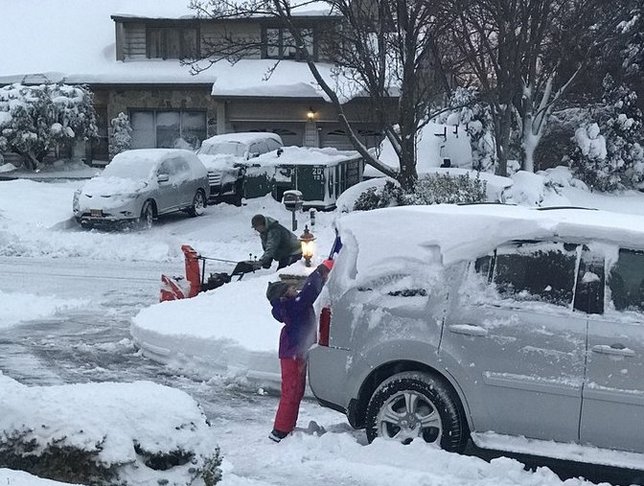 Long Islanders are used to cleaning up after a snowstorm.

The National Weather Service (NWS) in Upton has upgraded the Blizzard Watch to a Blizzard Warning for western Long Island and surrounding areas. The warning will be in effect from midnight tonight to midnight Tuesday night/Wednesday morning. 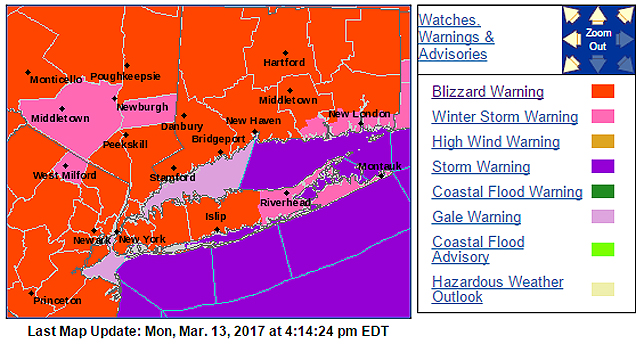 A Blizzard Warning is in effect for most of Long Island, and a Winter Storm Warning has been issued for the rest. Graphic by NWS NY Official Facebook Page.

The NWS warns of numerous hazards due to the late-season storm, including heavy snow and blizzard conditions. Snow may mix with or change to sleet and rain across southern and eastern Long Island coastal areas late Tuesday morning into Tuesday afternoon.

The high level of precipitation anticipated for this storm has caused the NWS to issue Coastal Flood Warnings and Advisories for portions of the Long Island, particularly across the North Shore as well as both forks of Eastern Long Island. According to the map diagram provided below by the National Weather Service, areas highlighted in purple may have 2-3 foot tidal departures resulting in advisories, and areas highlighted in green have 2.5-3 foott in tidal departures, resulting in warnings. 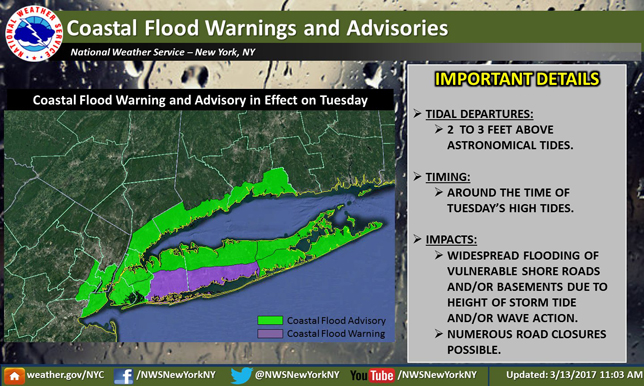 As for the latest news pertaining to the Blizzard itself, the NWS notes that snow accumulations in the Long Island area will potentially range from 12 to 20 inches, with the highest amounts of precipitation expected to the north and west. Snowfall Rates should be from 2 to 4 inches per hour starting early Tuesday morning into early Tuesday afternoon. Temperatures are forecast to be in the upper 20s, as per the NWS.

In addition, high Northeast winds will also pose a hazard, ranging from 25 to 35 mph in force with gusts up to 40 to 55 mph; highest winds are expected across coastal areas, according to the NWS. Visibility will be one-quarter mile or less at times.

Both Suffolk and Nassau County officials are issuing warnings to residents that once the storm begins, it will be dangerous travel due to whiteout conditions at times. Several roads may become impassable and power outages in numerous areas are possible. It is highly advised to avoid travel for any reason, but if you must travel, have a winter survival kit with you that contains food, water, and warm clothing. If you get stranded, it is highly advised that you stay with your vehicle.

Both Nassau and Suffolk County have held televised press conferences on their storm preparedness earlier today, noting that both municipalities have large crews at the read to plow and salt/sand roadways; preliminary work has already commenced. In addition, authorities will be canvassing neighborhoods for homeless to direct to safe shelters for the duration of the storm.

For the most up to date weather information, go to the LongIsland.com Weather Center, where you can find the latest weather forecasts, advisories, and more.

To get the latest traffic & road conditions before traveling, visit the LongIsland.com Traffic Center, and be sure to check out the live traffic feeds on our Traffic Cam Page.

The latest information on local School Closings & Delays is available here on LongIsland.com.