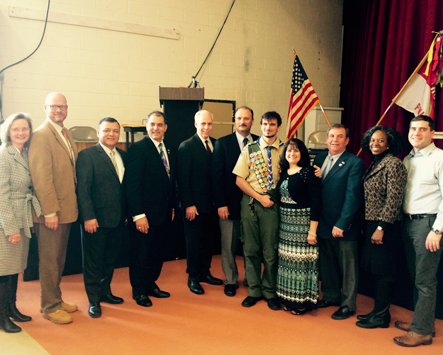 Babylon, NY - March 11, 2015 - Suffolk County Legislator Kevin J. McCaffrey (R-Lindenhurst) recently had the honor of attending the Eagle Scout Court of Honor for Dominick Joseph (DJ) Fraccalvieri, which took place at the United Methodist Church in Babylon.  In addition to DJ being surrounded by his proud parents, Rita and Joe, many friends, fellow scouts, and community leaders also participated in this very special occasion.  The impressive attendance was a testament to both DJ’s commitment to becoming an Eagle Scout, as well as the high esteem that such an accomplishment enjoys in the community.
A major component of one’s earning the Eagle Scout rank is the service requirement, which usually takes the form of a lasting contribution to the scout’s home community.  In keeping with this noble tradition, along with DJ’s appreciation of the outdoors (no doubt instilled by scouting), he decided to assemble and place a picnic table near the cafeteria of the Babylon High School.  Thanks to DJ, countless students will enjoy their lunches in the fresh air, while simultaneously witnessing the positive impact of community service.
“I never cease to be impressed by young men like DJ,” said Legislator McCaffrey.  “Despite all the pressures associated with schoolwork and preparing for post-graduation life, DJ made the time to follow through on his commitment and realize success.  We hear a lot of naysayers about the up and coming generations, but if DJ is any indication of what the future has in store for us, I think we are in very good hands.  I commend DJ for his selflessness, and I would also like to convey a special thanks to his parents for raising such a fine young leader.”
According to the National Eagle Scout Association, only about five percent of Boy Scouts achieve the rank of Eagle Scout.  The rank was established in 1912, and because of committed individuals such as DJ, it continues to be the model for personal development and service to the community.