Proposal Would Generate $318 Million in Shared Revenue Between State and Counties; Measure Would Level the Playing Field between Small Businesses and Big Online Retailers. 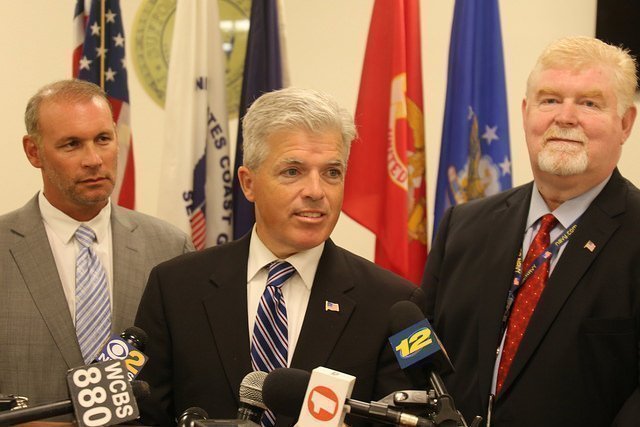 Long Island, NY - March 9, 2018 - Suffolk County Executive Steve Bellone and Nassau County Executive Laura Curran today called on the New York State Senate and Assembly to include the Internet Fairness Conformity Tax in their respective one-house budgets. The Internet Fairness Conformity Tax was introduced in Governor Cuomo’s 2019 Executive Budget.
The County Executives sent a joint letter to New York State Senate Majority Leader John Flanagan and Speaker of the New York State Assembly Carl Heastie to reiterate that local businesses on Long Island and across the state find themselves at a competitive disadvantage — losing customers and sales revenue to online providers because they are not required to collect sales tax on purchases.  As a result, these online sellers can offer their products at least eight percent cheaper.
“Our brick and mortar stores are at a competitive disadvantage against big businesses that do not play by the same rules,” said Suffolk County Executive Bellone. “We cannot afford to continue to subsidize these large businesses that do not collect the same sales tax revenue as our local storefronts. I urge our partners in the Senate and Assembly to enact this common sense proposal that evens the playing field for small businesses."
“I fully support the Governor’s plan to ensure that counties receive their fair share of revenue and protect our small businesses,” said Nassau County Executive Curran.  "I am proud to once again partner with Steve Bellone on a critical regional issue which impacts so many Long Islanders."
Currently, online marketplaces such as Amazon and eBay are required to collect sales tax from New York residents only if the seller is located within New York State. Essentially these online providers are providing a tax-free marketplace for sellers outside of the state. The Internet Fairness Conformity Tax would ensure New York’s existing sales tax laws are enforced fairly across most sales platforms, regardless of whether it is in a store front or over the Internet. This proposal would require the online marketplaces to collect sales taxes on any products sold to a New York residents from sellers located both within and outside of New York State.
This proposal is not a new tax and does not increase sales taxes. Rather, this proposal is a modernization to New York State’s current sales tax collection procedures. New York residents legally owe the sales tax that would now be collected by the online marketplaces if the proposal is implemented. The proposal allows New York State to adapt to the rapidly changing retail Internet economy by leveling the playing field for brick and mortar stores as online marketplaces continue to grow and expand rapidly. In 2016, online marketplaces in the United States transacted over $110 billion worth of purchases.
A 2017 Government Accountability Office (GAO) report estimates that New York State is not collecting between $500 million and $900 million annually due to sales transactions occurring over the Internet. The Internet Fairness Conformity Tax proposal would close a substantial portion of the gap.  According to the Governor’s Office, in the first year of implementation the proposal is estimated to generate $318 million — $159 million in revenue for the counties and another $159 million for the State.
County Executives recently met with Governor Andrew M. Cuomo in Albany to discuss the positive fiscal impact it would have on Main Streets across the state.  The New York State Association of Counties has also made this proposal one of their top budget priorities.  Similar marketplace fairness legislation has passed nationwide in states such as Washington, Pennsylvania, Minnesota and Rhode Island.
Retail Council of New York State President and CEO Ted Potrikus said: “Governor Cuomo’s proposal is pro-Main Street, pro-business, pro-local government, and pro-fairness.  Suffolk County’s retailers appreciate County Executive Bellone’s leadership in working to close the Marketplace loophole and we look forward to working with him to convince the state Legislature that this is the right thing to do.”
Suffolk County Alliance of Chambers Co-Chairs Gina Coletti and Bob Fonti said: “The Suffolk County Alliance of Chambers represents the many chambers and business groups in Suffolk County. With the emerging technology and the rapid growth in internet sales, brick and mortar businesses are at a severe disadvantage without parity or a level playing field with online sales.  The state and especially the county are missing out on millions of dollars of tax revenue while thousands of small businesses are negatively impacted and struggling to operate successfully in our main streets and downtowns. We are asking County Executive Steve Bellone to continue to fight for small businesses as they are the backbone of our local, regional and state economy.”
Nassau Council of Chambers of Commerce President Francesca Carlow said: “Small businesses have always been the back bone of our economy and The Nassau Council of Chambers of Commerce strongly encourages  New York State to impose second party vendors and e-commerce Marketplace suppliers to adhere to the same rules imposed on our local brick and mortar businesses. It is time to ‘Level the Playing Fields’.  It is a well-known term in commerce that ‘a level playing field’ is a concept about fairness.  It’s not that each player has an equal chance to succeed, but that they all play by the same set of rules.  As in the game of soccer it is obvious that one team would have an unfair advantage if the field had a slope.  The slope favoring internet sales has now become a mountain and the playing field must be made level in order to compete in a fair market.”