Reduces Recidivism by Removing Barriers for New Yorkers Returning to Society After Incarceration. 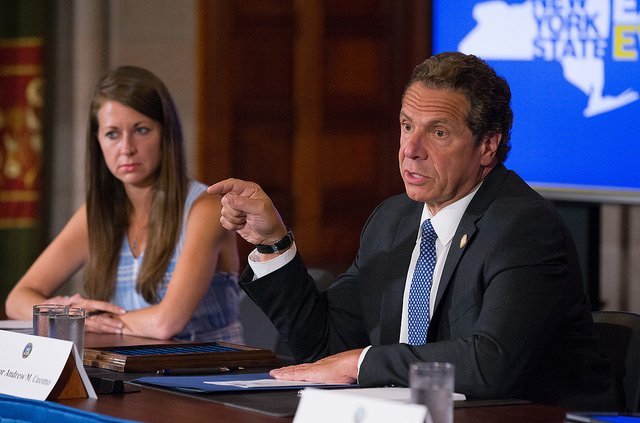 Albany, NY - March 5, 2018 - Governor Andrew M. Cuomo today announced he is advancing comprehensive reforms to streamline the process for incarcerated individuals to return to the community upon release from prison. The reforms will help improve access to jobs and licenses, expand eligibility for merit release and limited credit time allowances, create a new "geriatric parole" provision, and reduce financial burdens after release. The proposal is part of the Governor's five-pronged reform package to overhaul the State's criminal justice system as part of the FY 2019 Budget.
"These reforms promote both public safety and the rehabilitation of individuals who have paid their debt to society," Governor Cuomo said. "By eliminating outdated and unnecessary barriers to opportunity, we will help these individuals reintegrate into their communities, break the vicious cycle of recidivism and create a safer, fairer New York for all."
"Criminal justice reform is a top priority in New York and this proposal is yet another step in the right direction toward attaining that goal," said Lieutenant Governor Kathy Hochul. "Together, we can eliminate the stigma of criminality and provide a positive and encouraging re-entry experience to those who wish to return to society a better version of themselves than when they left it."
Remove Bans on Occupational Licensing
Expanding on existing laws outlawing blanket employment discrimination against people with criminal convictions, the Governor's proposal removes outdated bans in occupational licensing for professions outside of law enforcement. Applicants for these licenses will instead be assessed on an individualized basis. Eliminating these antiquated bans will effectively increase the number of occupational fields formerly incarcerated individuals have the opportunity to enter, promote economic stability after release, and aid in successful re-entry into society.
Expand Merit Release Programs
The plan will also safely widen release opportunities for incarcerated individuals who have proven rehabilitation by expanding the list of programs that make graduates eligible for merit release and limited credit time allowances. This will not only encourage more individuals to attend programs and classes while incarcerated, but will help to reduce the prison population and allow those who have learned skills and knowledge behind bars the opportunity to apply them productively within the community.
Initiate Geriatric Parole
Governor Cuomo's initiatives have led to a drastic decline in the overall prison population, however, the aging prison population continues to grow at an alarming rate. Providing the proper healthcare for these individuals, including frequent transportation to outside clinics and maintaining specialized units within correctional facilities, is increasingly complicated and costly. As a compassionate and cost-saving measure, the proposal will address this population with a new "geriatric parole" provision for inmates over the age of 55 who have served at least half of their sentences and whose debilitating or incapacitating medical conditions make it difficult for them to care for themselves within a correctional facility. Under this provision, the Board of Parole would examine each case and balance any public safety risk posed by these individuals with their need for age-appropriate treatment in the community.
Eliminate Parole Supervision Fee and Review Parole Revocation
To address financial stability, one of the greatest barriers to re-entry, Governor Cuomo has proposed the elimination of the current parole supervision fee, as well as having local child support enforcement offices review child support orders for people incarcerated over six months. Orders can be adjusted to reflect the parent's current financial circumstances, allowing them to re-enter the workforce without the added pressure of unpaid support, easing their transition and giving them the opportunity to start supporting their child again upon release.
To ensure that individuals under community supervision are not needlessly returned behind bars, the Governor has also ordered a review of parole revocation guidelines and practices to determine appropriate alternatives to incarceration for those who violate technical parole conditions, but whose actions do not threaten public safety. This will allow people to remain at their jobs, in treatment programs, and with their families, helping to solidify their successful re-entry to society without unnecessary interruptions.
Build on Governor Cuomo's Criminal Justice Reform Accomplishments
Under the leadership of Governor Cuomo in just the past year, New York has passed sweeping criminal justice reforms, including raising the age of criminal responsibility, requiring law enforcement to video-record custodial interrogations for serious offenses, allowing the use of photo arrays to identify witnesses to be admissible at trial, and extending the landmark Hurrell-Harring settlement's indigent criminal defense reforms to the entire state, becoming the first state in the nation to overhaul its public defense system in such a drastic manner.
In the time since Governor Cuomo took office, New York State has closed 24 prisons and juvenile detention centers—more than in any other period under one Governor in state history—decreasing the prison population by more than 6,000 within that time. The Governor also established the Work for Success Initiative which has helped over 20,000 formerly incarcerated people find work upon their release. Additionally, Governor Cuomo formed the state's first Council on Community Re-Entry and Reintegration in 2014 to address obstacles formerly incarcerated people face upon re-entering society. Since its launch, the Council has helped spur a number of changes to improve re-entry ranging from adopting "Fair Chance Hiring" principles in state agencies to issuing guidance that forbids discrimination at New York-financed housing based on a conviction alone. Finally, the Governor has provided approximately $4 million in annual grants to support twenty County Re-Entry Task Forces serving a total of 5,000 individuals returning to their counties after serving a state prison sentence. These individuals have been assessed as needing coordinated substance abuse and mental health treatment; job training, placement and skill development; and cognitive behavioral interventions, which are designed to help individuals change thinking that contributes to criminal behavior, improve positive motivation and further develop social skills.