Cuomo: "With the launch of these new license plates, veterans can celebrate the unbreakable bonds formed with fellow service members, as we acknowledge their remarkable courage and service to our country." 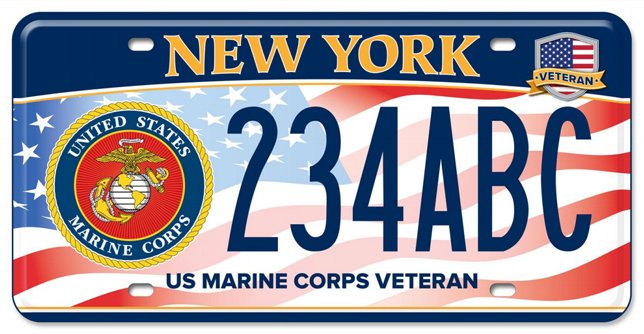 Albany, NY - November 13, 2017 - Governor Andrew M. Cuomo today announced that new service branch-specific license plates are available for the U.S. Army, U.S. Navy, U.S. Air Force, U.S. Coast Guard and U.S. Marines. The new custom plates, made available for the first time in New York, join a number of others offered in the Veteran and Military series, including the Purple Heart Recipient, Vietnam Veteran and War on Terror Veteran license plates. In celebration of Veterans Day, the more than 770,000 veterans who call New York home will now be able to represent their branch of service on their license plates.
"New York is proud of the hundreds of thousands of honorable men and women who have fought to protect the freedom and values this state and nation were founded upon," Governor Cuomo said. "With the launch of these new license plates, veterans can celebrate the unbreakable bonds formed with fellow service members, as we acknowledge their remarkable courage and service to our country."
The branch specific plates are the newest offering in the Military and Veteran series of license plates. In order to purchase a custom plate, New Yorkers are required to validate their military service with a copy of their discharge papers (DD-214 or equivalent documentation) and mail a copy with a completed application, found here.
New York State has a long history of veterans distinguishing themselves through military service, dating back to the American Revolution in 1775 through the present day. New York was the first state to officially name its state militia the National Guard in 1862, and in 1903, the Dick Act required all states to follow suit and also call their militia the National Guard. Decades later, Congress changed a law barring women from serving in the Guard, and just two days after the law passed, the first woman to join the National Guard was a member of the New York National Guard's 106th Tactical Hospital in 1956.
The launch of these new plates supports the Governor's commitment to create opportunities to honor and acknowledge men and women of service. The license plates offer New York veterans the opportunity to proudly display their branch of service and celebrate their dedication to protecting New York State. To learn more about these and other military plates that are currently offered, visit the Department of Motor Vehicles website.
NYS Division of Veterans' Affairs Director Eric J. Hesse said, "We are thrilled to have the branches of service license plates available to all those who have served. Though we all work and serve the same cause, each of us holds a special pride for the branch we served and now New Yorkers can display that pride for all to see."
DMV Executive Deputy Commissioner Terri Egan said, "DMV is proud to offer the new service branch plates to Veterans across New York State. We encourage New Yorkers to view the new plate designs that celebrate and honor those who have served in the United States Armed Forces."
Assemblyman Michael DenDekker, Chair of the Assembly Committee on Veterans Affairs said, "Our veterans and their families have sacrificed, and continue to sacrifice, so much to protect our freedom. I applaud Governor Cuomo for adding these license plates as an option for men and women to proudly display their service, as we honor all of our veterans today, and every day, in New York State."
Vietnam Veterans of America New York State Council President Ned Foote said, "The Division of Veterans' Affairs worked expediently to ensure that the Veterans of New York can display the pride they have in their branch of service through these license plates. I look forward to seeing the continuing progress made by Governor Cuomo and the Division in helping New York Veterans."
As part of New York's commemoration of the 100th anniversary of the United States' participation in World War I, an exhibit is currently displayed at the State Capitol to highlight New Yorkers participation in the war. The exhibit is on display in the historic War Room of the Capitol in Albany through November 2018 - the centennial of the signing of the Armistice that ended the fighting in World War I. The exhibit is free and open to the public. For more information about visiting the New York State Capitol, visit: www.ogs.ny.gov/esp/ct/tours/Capitol.asp.
To learn more about the brave men and women of New York who served during World War I, visit the New York State WWI Centennial Commission at www.ny.gov/WWI. The website contains links to oral histories, information on New York troops and Medal of Honor awardees, and a statewide calendar with more than 50 WWI events and exhibits across the state.
New York State Division of Veterans' Affairs
New York State's Division of Veterans' Affairs advocates on behalf of New York's Veterans and their families, as individuals and as a group, to ensure they receive benefits granted by law for service in the United States Armed Forces. The Division maintains 50 field offices to assist Veterans and their families at the local level throughout every region in New York. At all times, the Division strives to provide high-quality support, advice, and advocacy for the men and women who served our Nation and State. For more information, follow us on Facebook and Twitter, visit our website veterans.ny.gov, and call 1-888-VETS-NYS (1-888-838-7697) to schedule an appointment.