Twin Rinks of Eisenhower Park and Ferraro Brothers Hockey are proud to host the Israeli National Team for a charity exhibition game against Ferarro Brothers Team USA on Saturday, March 7, 2015, at 7:30pm. 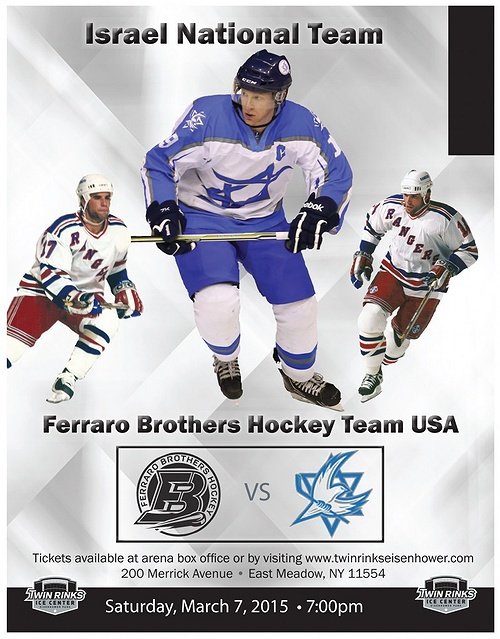 East Meadow, NY - March 5, 2015 - Twin Rinks of Eisenhower Park and Ferraro Brothers Hockey are proud to host the Israeli National Team for a charity exhibition game against Ferarro Brothers Team USA on Saturday, March 7, 2015, at 7:30pm at Twin Rink’s main arena located at 200 Merrick Ave in Long Island. Proceeds from ticket sales will benefit the Ice Hockey Federation of Israel to support the growth and development of ice hockey in Israel. The international press conference and media luncheon will be held on Friday, March 6, 2015, at 12:30pm in the Grand Lobby at Twin Rinks and will feature interviews with the coaching staff that includes NHL star Ron Greschner and actor Joseph R. Gannascoli as well as members of both teams.
"Israeli hockey celebrates 25 years of development and hard work this year. We now reached a figure of nearly 1,200 registered players, mostly young kids, and we can proudly say 99% are Israeli. Being a member of the International Ice Hockey Federation (IIHF) and participating in its development programming helps us in maintaining national teams such as U18, U20 and Mens. Our national team players are now gaining vast experience. They do it for other people, for their children and for the future. I am glad that the Twin Rinks and Ferraro Brothers are helping us to develop this beautiful sport,” said President of the Ice Hockey Federation of Israel, Evgeny Gussin.
“Hosting the Israel National Team at our home base, Twin Rinks, is an unbelievable honor. I look forward to the challenge of competing against Israel’s finest talent and getting together with old friends to put on a great show,” said Peter Ferraro, co-captain for Ferraro Brothers Team USA. “When they approached us with this opportunity, Peter and I thought this would be a great opportunity to raise awareness and funds for the Israeli National Team program. Israel is new to international competition and showcasing this talent in New York and at Twin Rinks will only help promote the game even further in Israel,” said Chris Ferraro, co-captain for Ferraro Brothers Team USA.
Team members for the Ferraro Brothers Team USA include former NY Rangers Chris & Peter Ferraro, Arron Asham and Edmonton Oilers Hall of Famer Glenn Anderson, to name a few. Team Israel will feature some of its longtime veterans including Tal Avneri, Sergei Frenkel, Daniel Spivak, Shlomi Levy, Itzik Levy and Daniel Mazour.
“We came to NY to play against Team Ferraro for a few reasons and we want to expand Israeli hockey and show everyone that there are Israelis that can play hockey at a high level. We also will use the game to prepare for the upcoming IIHF World Championships in April that will be held in Cape Town, South Africa,” said Tal Avneri.
General admission tickets are available at www.twinrinkseisenhower.com.
ICE HOCKEY FEDERATION OF ISRAEL (IHFI) - IHFI was admitted to the International Ice Hockey Federation in 1991. Israel first competed in the IIHF Pool C world championships in South Africa in 1992, finishing 5th out of the six participating teams (South Africa, Spain, Greece, Luxembourg, Turkey and Israel). IHFI receives support from all over the world. One hockey notable, Roger Neilson, coach of several NHL teams including the New York Rangers and Toronto Maple Leafs, opened a branch of his summer ice hockey camp in Metula and attracted North American players to train and compete with young Israelis interested in the sport. http://www.israhockey.co.il
TWIN RINKS OF EISENHOWER PARK – Twin Rinks is a brand new state-of-the-art, multi-surface ice arena and entertainment center, located in Eisenhower Park in East Meadow, New York. The facility features two NHL-sized surfaces, along with a three-quarter sized outdoor ice rink, which will be used as a sport court during non-winter months. It also features a full service pro shop, Institute 3E Workout facility, STEP Academy and home arena to the NY Bobcats, Long Island Gulls Youth Hockey, Long Island Dynamo and Ferraro Brothers Hockey. www.twinrinkseisenhower.com
For media opportunities and press conference inquiries, contact: MJ Pedone – Indra Public Relations – MJ@indrapr.com or (646) 593-7220.
For additional event information, contact: CJ Nizich - Twin Rinks of Eisenhower Park – CNizich@twinrinkseisenhower.com or (516) 441-0070.