Lodestar Children's Services: A Very Special Asset to Long Island; One Dedicated to Making A Difference in the Lives of At Risk Youth

Group’s mission is to “empower children and families” by providing them with the necessary tools to develop, improve, and support their own needs; holding major fundraising effort May 3. 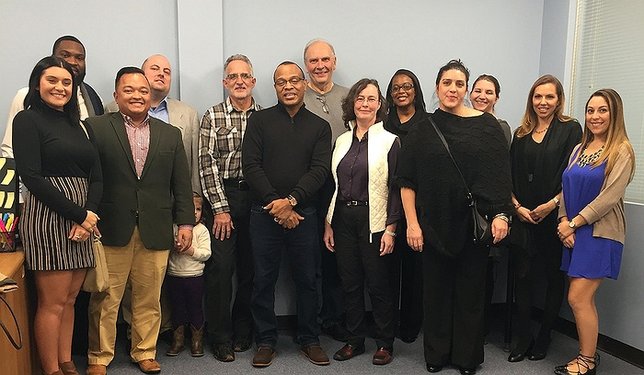 Lodestar's staff and Board of Directors.

Long Island, NY – March 2, 2018 - Growing up is never easy, but in this day and age of social media,kids are facing a whole new assortment of stresses and problems that the generation before them couldn’t even imagine. Good thing here are some who are genuinly willing and able to lend a helping hand to kids in distress. For example, people such as James Regan of West Babylon, uses his organization, Lodestar Children's Services, which is a group comprised of caring individuals who are dedicated to making a difference in the lives of at-risk youth.
Regan, the group’s Executive Director and Founder, was inspired to create Lodestar’s unusual name through a desire to pick a word that people might not immediately be familiar with as a way of making a distinct impression upon them, he said.
“I wanted a word that people would have to look up, and that way it would stick in their brain,” he said. “Lodestar actually ties in perfectly to what we're doing…it means Guiding Light, and it refers to the North Star, and we thought it was a good image of what we're trying to be, and what we're trying to do.” 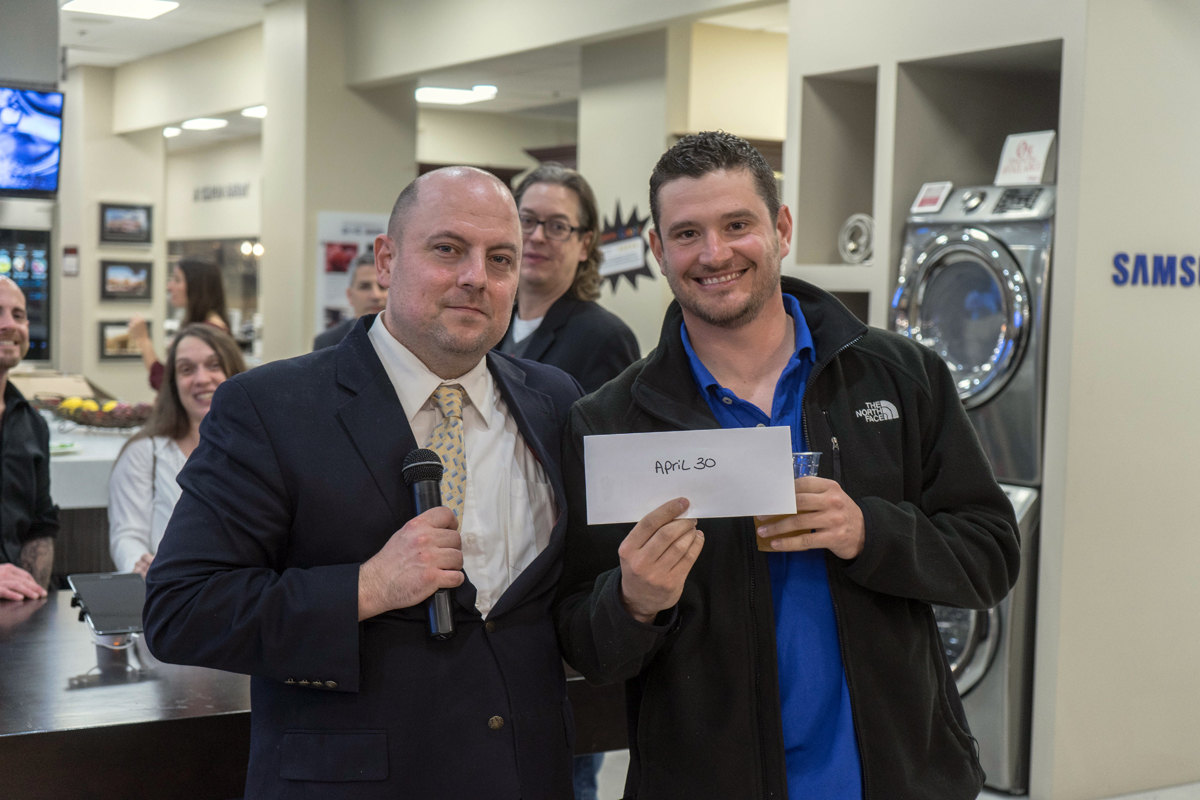 Founder James Regan with childhood friend and Lodestar supporter Joseph Doumas, co-owner of Island Tent Rentals. Photo Credit: Tyler Greco
Incorporated in April of 2016, Lodestar started serving their first client in December of that year. As a Licensed Master Social Worker (LMSW), Regan noted that he's always had an entrepreneurial spirit, and said that he created Lodestar because he wanted to combine that leaning with a way of helping people at the same time.
“I started a business once before, and on a personal level it really excited me. I wanted to do something on my own again, because I like to be involved in a little bit of everything...the bookkeeping, the website, everything. I'm a creative spirit and I like to keep my hands in a lot of things,” he said. “I also love kids...I have a heart for children, and my background is in residential foster care and also in summer camps, and I've spent the last five years working at in-home programs and agencies in the non-profit world, so starting my own group was the next logical step.”
Lodestar specializes in providing aid to young people – typically ages 8 through 21 – who may have acute social or mental disabilities and may be on the cusp of requiring institutional care. Lodestar, Regan noted, provides and alternative to this troubled population, and enables many people in dire situations to establish a degree of independence and security that they had previously been lacking.
“Our mission is simple...people that normally might have to live in institutions, hospitals, nursing homes...let's try to give them more help in their home, and see if we can avoid them having to reside in an institution,” he said. “So we going to kids’ homes and we provide services that work on socialization, recreation, family living skills. We create a behavior chart, so that someone knows to brush your teeth, or clean their room, or organize their backpack …the things they need to do to get by every day.”

As all of his organization's services are currently community-based, Lodestar is currently operated out of Regan's Sayville home, he said.
“We go to the client…they're not coming to us,” he said. “We're trying to maximize every dollar right now, so running Lodestar out of an office in my home certainly cuts down on the overhead.”
Lodestar is certified by New York State and operates as a non-clinical entity; their clients already have separate psychiatric help, and his organization essentially serves as an additional crutch for individuals who may require additional aid getting their lives back on track.
“These are the most vulnerable kids on Long Island, so these are kids that would qualify to go live in a group home or a treatment center,” he said. “However, their parents want to try something else first before resorting to that, and that's where we come in.” 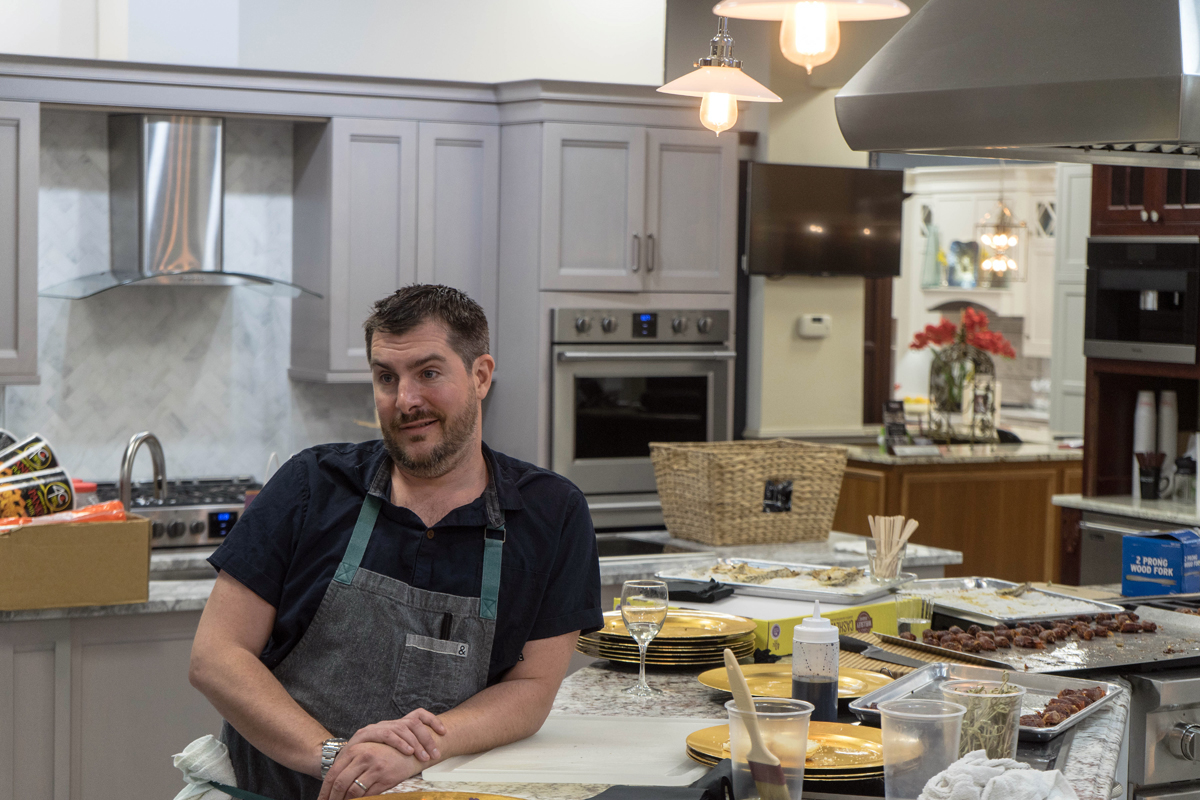 Harold Dieterle, the original winner of Bravo's Top Chef executing the menu at last year's  "A Force for Families" fundraiser. This year, Harold will be on-hand as a distinguished guest. Photo Credit: Tyler Greco
The type of population Lodestar currently serves are those primarily afflicted with various forms of mental illness, such as those with severe social anxiety, various forms of psychosis, or who may be suicidal. While they do not currently focus on individuals with issues such as drug addiction or physical disabilities, at times those maladies are faced by their clients as well, and in those instances Lodestar does not shy away.
“A lot of our kids will end up having more than one issue, so we certainly have kids that have disabilities as well, or drug addiction issues,“ Regan said. “Mental health is the primary issue we currently deal with, but a lot of my kids have more than one thing going on, and we try to do whatever we can to help them.”
Future plans include expansion into assisting children who may be mentally disabled or in the foster care system as well; Lodestar is currently in the process of applying for the waivers that would cover those populations as well.
The organization currently services 40 families in Suffolk County; however, they are currently in the process of eventually expanding throughout Nassau County and Queens as well. Lodestar currently has a staff of 12, with Regan currently handling four children himself in addition to the rigors of running the day-to-day aspects of the business, such as overseeing finances, handling Medicaid billing, PR work, marketing, and a whole host of other duties.
As for what the future holds for Lodestar Children's Services, Regan said that, in addition to upcoming summer camp and after-school programs, he envisions a day when he would actually be able to oversee the opening of a youth center as well. 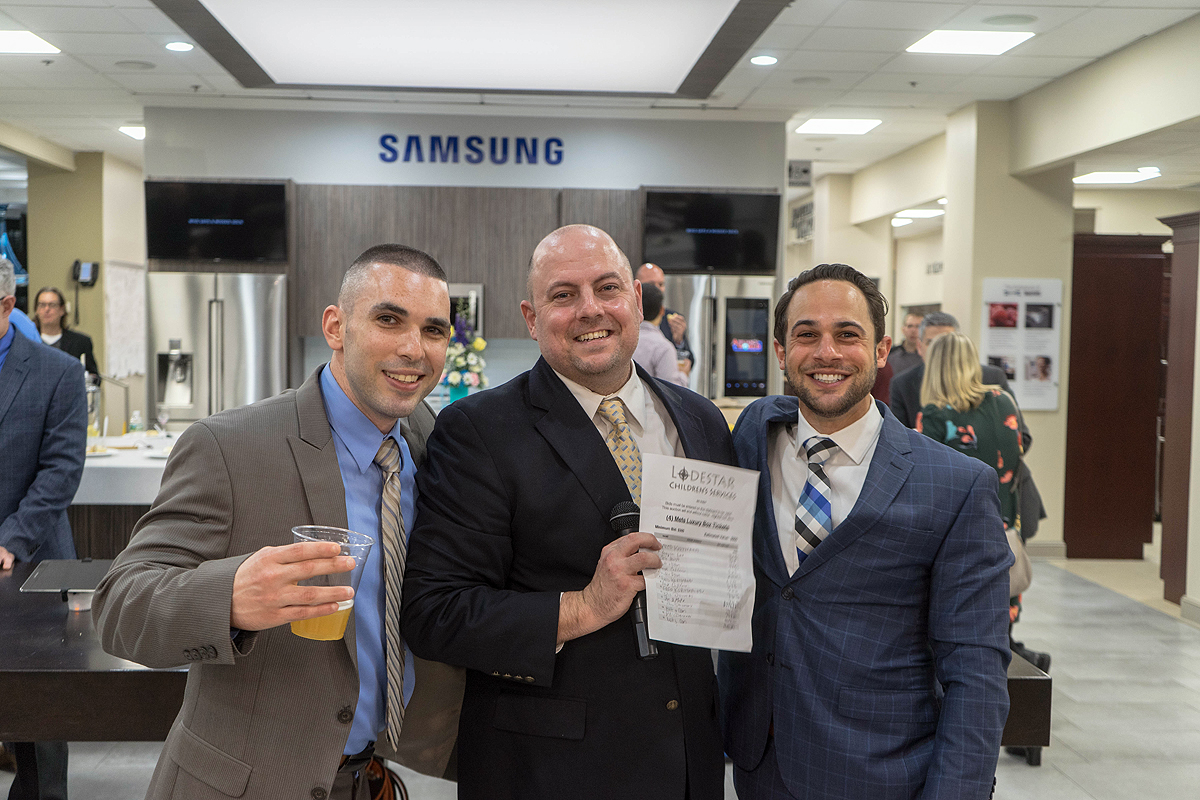 Founder James Regan with supporters Domenic Antinucci and Matt Smith, grand prize winners at last year's fundraiser. Photo Credit: Tyler Greco
While their services are primarily reimbursed through Medicaid, in order to help cover the bills the program does not cover, Lodestar holds regular bouts of fundraising as well. Their latest event is their second annual "A Force for Families" fundraiser to be held Thursday, May 3rd at the Noel S. Ruiz Theater in Oakdale. An evening of cocktails, music, and raffle baskets, the goal of the event is to achieve a significant milestone- 300 donors and over $30,000 raised, and anyone who is interested in participating in this worthy cause can register by clicking here; early bird pricing is available through April 6.
Running an organization like Lodestar can be a great deal of hard, grueling work; however, Regan said that the end result – helping children in need go on to lead healthy, productive lives – is more than worth any effort he and his dedicated staff may expend each and every day.
“It's a lot of pressure, but obviously there's a lot of satisfaction too,” he said. “Taking a 16 year-old who just came out of a six-month hospital stay, and when we're done working with them, they're back to doing well in school, holding down a job, staying off marijuana and alcohol, and have their lives on a positive trajectory...it's why I signed up for this. I'm building something that's an asset to Long Island, and that's very special and very satisfying to me.”