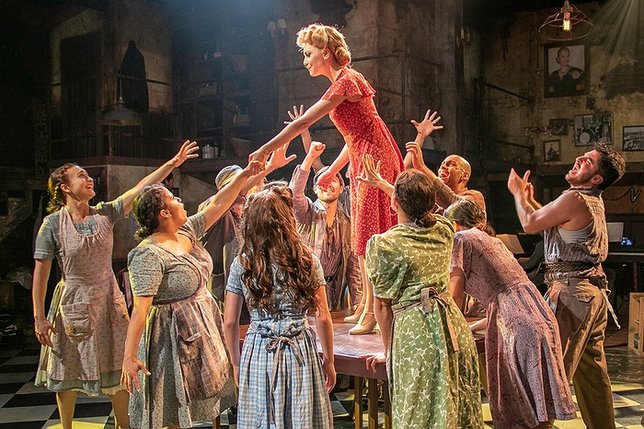 The cast of EVITA was part of the 2018 Mainstage Season.

Sag Harbor, NY - February 27, 2019 - Bay Street Theater & Sag Harbor Center for the Arts is pleased to announce that, for the second year in a row, it was named as a Finalist in the Arts and Culture category in The 7th Annual Long Island Imagine Awards.
The Long Island Imagine Awards was created to offer formal acknowledgement to some of Long Island’s most effective and innovative nonprofit organizations. Last year’s event attracted over 400 attendees from the nonprofit and business communities and an even larger crowd is expected this year.
Winners will be announced LIVE at the awards gala at the Crest Hollow Country Club on Tuesday, April 30, 2019. Nominated organizations, their constituents and the Long Island business community are expected to attend.
More than 170 entries were submitted for consideration in 5 categories, including Innovation, Leadership Excellence, Rising Star, Social Impact and Arts & Culture.  Bay Street Theater & Sag Harbor Center for the Arts is one of four finalists in the Arts and Culture category.
“We are so pleased to be a leader in arts and culture as a professional regional theater,” says Bay Street Theater’s Executive Director Tracy Mitchell. “It is wonderful to be recognized for the hard work of a wonderful team.”
Finalists were chosen by Long Island business professionals during preliminary judging. Members of the Awards' Distinguished Judging Panel selected the Imagine Awards winners from among the Finalists during final judging.
“Being named a Finalist in The Long Island Imagine Awards is an important achievement,” said Ken Cerini, Founder of the Long Island Imagine Awards.  “It means that the Organization has been identified as a leader on Long Island, exhibiting impactful and innovative operations.  Congratulations to all of the Finalists on their achievement.”
Details about Long Island Imagine Awards and the list of Finalists in all categories are available at http://www.ceriniandassociates.com/imagine-awards.
Bay Street Theater & Sag Harbor Center for the Arts is a year-round, not-for-profit professional theater and community cultural center which endeavors to innovate, educate, and entertain a diverse community through the practice of the performing arts. We serve as a social and cultural gathering place, an educational resource, and a home for a community of artists.
About The Imagine Awards
The Imagine Awards was created in 2012 by Managing Partner, Ken Cerini of Cerini & Associates, LLP.  Honoring organizations of all types and sizes and the people behind them, the Imagine Awards recognize outstanding performances in the Long Island Community. Learn more about the Imagine Awards, visit http://www.ceriniandassociates.com/imagine-awards.