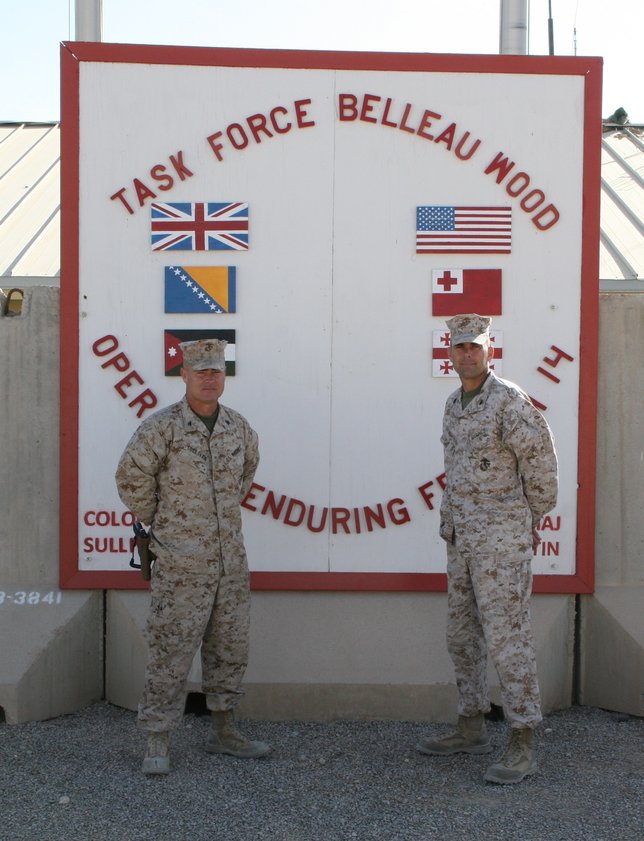 Camp Leatherneck, Afghanistan - February 27, 2014 - Defending the perimeter of Camps Bastion and Leatherneck is not an easy task. Protecting the personnel working and living aboard the camps is a 24-hour-a-day job, and one that Task Force Belleau Wood is fully dedicated to and takes very seriously. So, as to not disrupt the battle rhythm of force protection, it was quietly that Col. Dan M. Sullivan transferred authority as the commanding officer of TFBW to Col. Pete B. Baumgarten, Feb. 24.
Task Force Belleau Wood is a joint task force comprised of several smaller units from countries around the world, including the United States’ 1st Battalion, 9th Marine Regiment, II Marine Expeditionary Force and a provost marshal detachment from I MEF; a squadron from the United Kingdom’s Royal Air Force referred to as TFBW’s Force Protection Wing; the 31st Light Infantry Battalion from the Republic of Georgia; and a Jordanian Armed Forces Task Force. Together they control an area of operation spanning approximately 1,000 square kilometers.
“We joke around that this is coalition warfare at the tactical level,” said Sullivan, a Long Island, N.Y., native. “We’ve been doing coalition warfare at the operational and strategic level for more than a hundred years now, but at the tactical level it’s something that is a bit new, and it’s working amazingly well. We’ve had great commanders, which has made this easier, but there is no doctrinal template for something like this. There has been a lot of creativity and proposition when it comes to making this work. It is learning as you go.”
Sullivan continued to say that when it comes to working with different countries, they each have their own doctrine, own training experiences, their own table of equipment and organization, as well as different rules of engagement. He said they meet these organizations for the first time and have to learn each other’s strengths and weaknesses, and play to their strengths.
The mission of TFBW is to prevent an attack on the Bastion/Leatherneck complex by taking an offensive and aggressive approach toward the enemy, engaging them away from the base out in the area of operations.
“We try to stay ahead of them by disrupting their ability to move rockets and set up launch points,” said Sullivan. “And when they do occasionally get a shot off, we quickly follow up, try to track them down and gather intelligence. From the ground support to air support, there is a lot of ‘cat and mouse’ going on out in the battle space.”
Nationwide statistics show that Helmand province remains one of the most dangerous provinces in Afghanistan, said Sullivan. Every day, service members serving with TFBW see kinetic events from patrols taking direct fire to improvised explosive device activity remaining strong in the area of operations. He said they even face occasional indirect fire.
Both Sullivan and Baumgarten have served as regimental infantry commanders prior to taking command of TFBW. While the commanding officer for TFBW, Sullivan had a team of Marines with him serving from 2nd Marine Regiment.  As Baumgarten took responsibility as the new commanding officer of TFBW, he shared his objectives for his new unit and the current deployment.
“My goal is to make this the quietest seven months in the history of the Bastion/Leatherneck complex in terms of threats,” said Baumgarten, an El Paso, Texas, native. “Dan and his team of Marines have done a tremendous job since hitting the ground in August. We can say with definitive certainty that he has operated with 2nd Marines and TFBW and has conducted operations here without having a successful attack on the Bastion/Leatherneck complex. It’s my goal to replicate that. And success for us at 1st Marines and TFBW going forward is a lot of quiet, no attacks, or if an attack does occur, we defeat that attack on the perimeter of the base and prevent the loss of lives, or the way RC(SW) operates. That goes from the airfield to the convoys through our area of operations to the actual headquarters.”
Baumgarten continued to say that 1st Marine Regiment and TFBW remain ready and eager to fulfill their duty and obligation as the protector of the perimeter and area of operations.
“We are very excited about the opportunity to come in as the last regiment to deploy to combat in Afghanistan for the Marine Corps,” said Baumgarten. “There will have been 13 years of war when this all winds down in the fall of this year, and 1st Marine Regiment will be the one that’s coming out as the last regiment. That really has us focused on the historical aspect of the whole opportunity. There is a quote I am reminded of and use when I’m talking to the Marines when we have our battle update; it is from Archibald Henderson, our commandant from the early 1800s who posted a sign on his door that said, ‘Gone to Florida to fight the Indians, be back when the war is over.’ For us it is slightly different, but yet the same in a lot of ways… ‘We are gone to Afghanistan to fight the Taliban and we’re going to be back when the war is over.’ So for us the real interesting aspect of this is we are going to go all the way to the end. We have a security responsibility here until the last Marine leaves this province for home.”