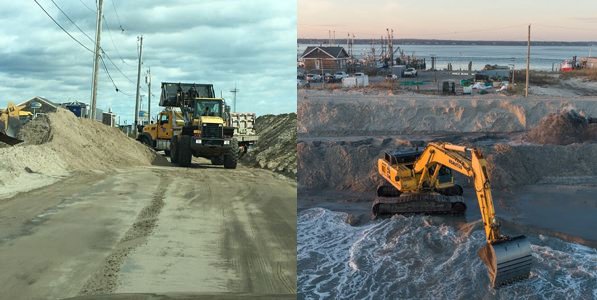 After storms battered the East End of Long Island this fall, destroying dunes along Dune Road in Hampton Bays, causing flooding, and what officials called a near breaching of the barrier island just west of Shinnecock Inlet, a Federal dredging and restoration project is in full effect to help restore the beaches.

The work began on February 10th and is expected to take another month to complete.

The effort-named the West of Shinnecock Inlet (WOSI) emergency replenishment project-will pump 569,000 cubic yards of sand onto the beach to bring the beach and dune up to the designed standard of the US Army Corps of Engineers.

A statement released by the town said the WOSI project will restore the area to its 2005 authorization level: a 15-foot-high dune with an associated 140-foot-wide beach berm from the toe of the dune. The town called it a “better, more robust outcome than simply restoring this area to its recent 2019 pre-storm level.”

The area of beach affected is opposite the Shinnecock Commercial Fishing Dock. A dredge was put into position near the east end of Dune Road by the Great Lakes Dredge & Dock Company, who were awarded a $10.7 million contract by the U.S. Army Corps of Engineers.

This work will not impact other projects currently underway at Westhampton Beach and Fire Island Inlet to Moriches Inlet, according to a statement posted by the town.

After addressing the problem this October with several smaller restoration efforts by the New York State DOT, Suffolk County DPW, and Southampton Highway crews, new storms later in the season washed away their work and the area became exposed again.

According to a Town of Southampton statement, the east end of Dune Road is home to three restaurants, the second largest commercial fishing dock in New York State, a public beach and a County park. Dune Road is on a vital barrier island that protects the mainland during storms.

“We have worked hard over the past few months to hold back the tide and prevent a catastrophic breach in this area,” said Southampton Town Supervisor Jay Schneiderman. “A much larger effort was needed, well beyond our local capacity.”

Schneiderman said the town reached out for federal assistance.

“I want to thank Sen. Schumer and Congressman Zeldin for calling on the US Army Corps of Engineers to expedite this emergency project,” he added.

This WOSI project will be followed by the Fire Island to Montauk Point Plan (FIMP) project, that officials think will be signed by the president this spring.

Under the FIMP plan, the integrity will be maintained for 30 years if new repairs are needed due to a storm event, the dredge could be dispatched again.

A link to a drone video of the project was posted to the Town of Southampton website recently showing the work as it is being done, which they said was produced by fireislandandbeyond.com.

“The dredging project by the US Army Corps of Engineers on the east end of Dune Road began last week and a bird’s eye view reveals they are already making considerable progress,” the Town said in a statement.