Battle lines between a developer's right to build and environmental preservationists drawn over project. 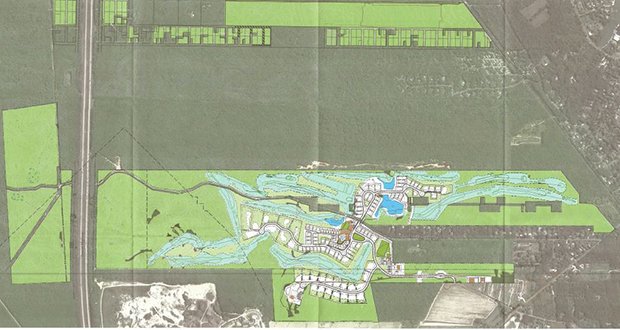 Environmentalists and developers are in a pitched battle over a residential development and golf course complex that is proposed for a 600 acre site in East Quogue. After years of back and forth, the project is again being considered after Southampton Town denied a previous version of the development.

Originally called The Hills, that plan was denied after Discovery Land Company, an Arizona-based developer, failed to get a supermajority on the Town board to vote in their favor.

So Discovery Land Company, who has created luxurious developments all over the world including Dune Deck Beach Club in Westhampton Beach, went back to the drawing board and came back with a slightly different proposal with a new name: Lewis Road Planned Residential Development.

For the most part, the plan is the same: build a 118-home development with an 18-hole golf course and clubhouse. But, instead of a public golf course, it will now be private, for resident members only.

The residences are also deemed to be seasonal homes (with the exception of 12 full-time use, affordable residential units) so the developer says the impact on school enrollment will be minimal.

The builder says it plans to preserve 65% of open space outside of the development area, limiting the amount of fertilizer-dependent vegetation to 15% of the site, or about 88 acres - presumably the greens of the golf course itself.

The development will build on a total of about 161 acres and a little over 427 acres will be permanently preserved as open space.

But a public or private golf course isn’t the main issue. The concern centers on the complex’s proximity to Long Island’s Pine Barrens.

The developer says that impact will be minimal and that they have the right to develop the land. The argument against the plan is that any development to this area that is so close to what is called the core area of the pine barrens will threaten the groundwater that Long Islanders depend on for drinking.

In its October 2019 findings report, the Town of Southampton Planning Board said that by limiting the golf course to members of the community the developer has further reduced the intensity of the site.

It’s a complex issue that has recently caused a side controversy where a group from the hamlet has even petitioned to incorporate East Quogue into a village.

The project is located in what is labeled the Compatible Growth Area (CGA) of the pine barrens, a political concession that was given when officials sought to protect the pine barrens in the first place. Projects within the CGA that conform to guidelines can be built on and a property owner can’t have their right to develop a site within the CGA stripped away.

In the past, the town has offered to buy the parcel of land from the developer who refused to sell.

The issue-according to those who are concerned with the health of these environmentally sensitive areas of Long Island-comes down to balancing preservation of the core with the growth allowed by the CGA.

"The Lewis Road PRD is essentially the culmination of the decades of developmental tensions that have been present since the pine barrens were first protected," said Richard Murdocco, a planning expert who teaches in the public policy graduate program at Stony Brook University.

Despite concerns, Murdocco thinks this project is probably inevitable.

"Any development in the pine barrens, including that which is legally allowed in the CGA, runs counter to the goal of preservation and protection of the ecosystem,” he said. “That being said, as-of-right development is just that, so if the developer follows the CGA guidelines, there likely isn't much that can be done to stop the Lewis Road project."