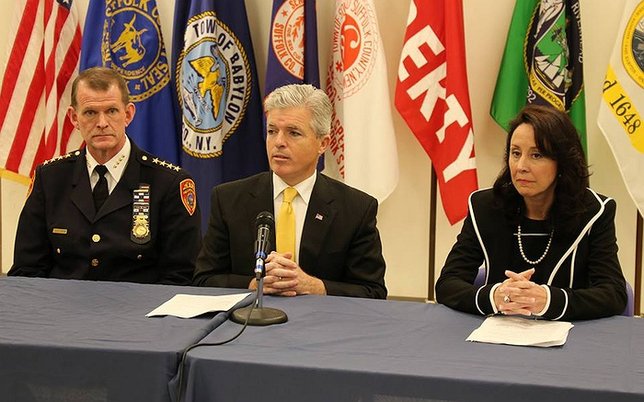 Suffolk County, NY - February 23, 2018 - Suffolk County Executive Steve Bellone today announced the nomination of Geraldine Hart – Senior Supervisory Resident Agent in charge of the Federal Bureau of Investigation's Long Island Office -- to serve as the next Police Commissioner for the Suffolk County Police Department.  Hart, a 21-year veteran of the Bureau, would become the first woman to hold the position of Suffolk County Police Commissioner in the history of the Department.
“Geraldine possesses the integrity, competence, and excellence that we are looking for in someone to lead the Suffolk County Police Department,” said Suffolk County Executive Bellone. “As our next Police Commissioner, she will bring a fresh perspective and build on the progress that we have made over the last two years.”
Geraldine Hart, nominee for Suffolk County Police Commissioner, said: “I am honored for the opportunity to serve the residents of Suffolk County and privileged to serve with the brave, hardworking men and women of the Suffolk County Police Department. I am extremely optimistic about the future of the Suffolk County Police Department and what we can accomplish together.”
As the Senior Supervisory Resident Agent of the FBI's Long Island Office since February 2014, Hart has effectively led and directed the operations and investigations of 115 FBI Special Agents, Task Force Officers, and support personnel, affecting a diverse region of over three million residents. In this role, Hart directly supervises the Long Island Gang Task Force, as well as spearheaded the first multi-agency MS-13 Intelligence Center to centralize and facilitate the sharing of gang intelligence, with an emphasis on enhanced collaboration between the FBI, Suffolk County Police Department, New York State Police, Nassau County Police Department, and local governments.
In addition to her work combatting gang violence, Hart oversees complex investigations that include public corruption, white-collar crime, terrorism, counter-intelligence, child exploitation, and cyber crimes. Hart is also actively engaged in liaison activities, such as providing active shooter training opportunities for Nassau and Suffolk School Superintendents, houses of worship, and the first FBI Teen Academy in Central Islip and Brentwood. Her leadership abilities were recognized at the highest levels as the recipient of the 2015 Director's High Impact Leadership Award, which is given to a select number of individuals in the Bureau based on an anonymous survey among their peers who rank them for superior leadership abilities.
Hart began her career as an FBI Special Agent focused on Transnational Organized Crime, where she helped lead and execute complex investigations end enforcement actions to dismantle violent organized crime enterprises, such as the Lucchese crime family.  In 1999, Hart was assigned to the Lucchese Organized Crime Squad, working on an investigation that led to the conviction of fugitive Frank Federico, who was responsible for the murders of garbage-industry haulers and informants Robert M. Kubecka, of Greenlawn, and Donald Barstow of Stony Brook (United States v. Federico). That same year, Hart was awarded the Office of Inspector General’s Integrity Award.
As an FBI case agent, Hart, in 2005, worked closely with the Suffolk County Police Department to investigate two former NYPD detectives who secretly worked as mafia associates on behalf of the Lucchese crime family.  The investigation led to the indictments of Louis Eppolito and Stephen Caracappa, who were ultimately convicted of committing murder and disclosing sensitive law enforcement information to mob bosses. The investigation also led to the discovery of a body in Brooklyn in connection with the criminal actions of these two individuals (United States v. Eppolito). For her performance on the case, Hart received the United States Attorney General’s Award for Excellence in Law Enforcement, the highest award given out in the FBI.
In 2012, Hart was promoted to Supervisory Special Agent to supervise a task force comprised of FBI Special Agents and NYPD Detectives investigating the Genovese, Colombo, and Bonanno crime families. In January 2014, these investigations resulted in the takedown of five organized crime members for murder, one tied to the Lufthansa heist at John F. Kennedy Airport, along with a body that was identified and dug up dating to the 1970s. Hart also directed large-scale investigations into allegations of corruption at the District Council and local union level, which resulted in successful prosecutions.
Hart received a Bachelor of Arts from St. Francis College and Juris Doctor from St. John’s University School of Law.