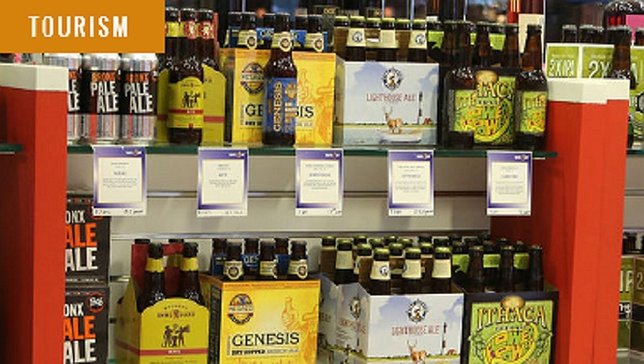 Over 100 farm-based craft beverage retail branch stores now open across NY; 32 new branch stores open in the last year as a result of the Governor's effort to simplify licensing and expand business opportunities.

"The demand for New York's world class beer, wine, cider and spirits continues to grow, and by supporting the expansion of craft beverage businesses, we are able to connect locally grown products to more customers than ever before," Governor Cuomo said. "These off-site stores are allowing these small businesses to enter new markets, create new jobs, and increase revenues to support the growth of local communities across the state."

The Governor has overhauled the state's Alcoholic Beverage Control laws including provisions to expand branch store privileges to all farm-based beverage manufacturers and permit craft beverage businesses to open up to five additional retail locations outside their manufacturing facility with no additional licensing fees. The law allows farm-based beverage producers to sell any farm-produced wine, beer, cider and spirits by the bottle and by the glass, host tastings, open restaurants, operate gift shops, and manufacture and warehouse their products at these branch locations.

The wine industry was the first to be allowed to open branch stores through Governor Cuomo's Fine Wine legislation in 2011. In addition to allowing farm wineries to operate up to five retail locations, the legislation cut down the amount of required paperwork, reduced capital costs and consolidated winery licenses to simplify the approval process.

Prior to this legislation, farm wineries could operate satellite stores, however they were limited to off-premises “to go” sales of their own products. Satellite stores were not allowed to sell their own product by the glass or any other NYS produced beverages by the bottle, and were prohibited from opening gift shops or restaurants, or from manufacturing or storing alcohol. They were also subject to more stringent licensing requirements, with licensing fees ranging from $125 to $500, depending on their location. The new farm-based branch stores, considered extensions of the manufacturing facility, require no additional licensing fees to open and operate.

In 2013, the Farm Brewery law provided the opportunity for breweries to open branch stores and in 2014, the Farm Cidery law authorized farm cidery branches. Farm distilleries were permitted to open a branch store as part of the Governor's Craft Act, which became effective on December 13, 2014.

State Liquor Authority Chairman Vincent Bradley said, "The Governor's continuing efforts to update outdated laws, regulations and policies have accelerated the growth of New York’s burgeoning craft manufacturing industry. The surge in no-fee branch stores opening across the state is another example of the Governor’s effort to make the state a better place to do business by creating an easy, cost free means for our craft manufacturers to expand to new markets."

State Agriculture Commissioner Richard A. Ball said, "The agricultural industry has seen an incredible boost from our State's craft beverage producers who are proudly sourcing their ingredients from New York farms and meeting their customers’ demands for a unique and diverse selection of beverage products that are locally made. Thanks to the Governor's continued commitment to this sector, we’re clearly seeing more businesses open and expand, which is helping to grow our local economies and spotlight New York agriculture."

President of the New York Wine & Grape Foundation Jim Trezise said, "Governor Cuomo's creation and support of branch offices has greatly benefited the New York wineries and other craft beverage producers. The ability to have multiple locations around the state for direct sales to consumers builds revenues and brand loyalty, as well as tax revenues for the state and counties. It's a win-win-win situation."

Executive Director of the New York State Brewers Association Paul Leone said, "The ability for farm breweries to open branch stores allows them to not only expand their businesses, but also provides them another way to generate income which allows them to hire more people, grow their brands, and offset the costs of purchasing local New York ingredients. The Governor’s vision with these licenses has allowed all farm beverage producers the ability to grow, and contribute even more to the state’s economy."

President of the New York State Distillers Guild Brian McKenzie said, "Craft distilling is booming in NYS and the ability to open a branch location offers us additional opportunities to directly engage with our customers. Most of our member distilleries make the tourism aspect of our businesses top priority and the branch office provision is another way to expose people to high quality NYS distilled spirits."

New York Cider Association Executive Director Jenn Smith said, "Governor Cuomo's vision for off-site branch stores has facilitated direct relationships between New York's cider makers and the craft beverage enthusiasts living in and visiting our state. The result is growth and increased sales for the cider makers and a deeper awareness and appreciation of locally grown and made products on the part of consumers."

Under the leadership of Governor Cuomo, New York is now home to over 600 farm wineries, breweries, distilleries and cideries. The number of farm wineries in New York has increased by more than 65 percent, from 195 in 2010 to 322 today. The number of farm distilleries also grew from just 10 in 2010 to 109 today. Two new licenses have been created since 2011, including the Farm Brewery license in 2013 and the Farm Cidery license in 2014, which has led to the establishment of 149 farm breweries and 29 farm cidery businesses.