The following statement is attributable to Attorney General Eric T. Schneiderman on today’s ruling by the New York State Public Service Commission in the Consolidated Edison utility hearing, which requires the company to spend $1 ... 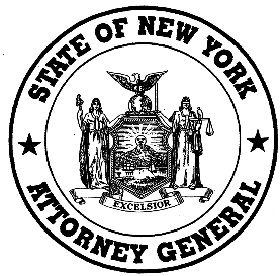 “Hundreds of thousands of New Yorkers suffered from Con Ed electricity outages when Sandy hit New York State in 2012. Today’s ruling by the Public Service Commission is an important step toward ensuring that the widespread power outages left in the storm’s wake will not be repeated,” Attorney General Schneiderman said. “While holding the line on rates, Con Ed is required by the PSC ruling to invest $1 billion to protect its system from the consequences of severe storms and to engage in an in-depth study of its system’s vulnerability to climate change.

“My office played a key role in this proceeding, focusing attention on the real and increasing threat that climate change poses to Con Edison’s infrastructure and, ultimately, its customers,” Attorney General Schneiderman continued. “I am pleased that both Con Ed and the PSC listened, and the company has committed to taking actions necessary to ensure that New Yorkers continue to receive safe and reliable utility service in a time of increasingly extreme weather.”

The PSC ruling is the result of Consolidated Edison’s request, submitted in January 2013, for a rate hike for its electric, gas and steam customers and a proposed $1 billion “storm-hardening” plan to protect its system from the impacts of climate change.

Attorney General Schneiderman intervened in the case and, in testimony and briefs filed with the PSC, his office maintained that Con Edison’s initial storm-hardening plans failed to adequately address the risks posed by climate change, such as sea level rise, increased heat waves and precipitation. According to the latest report of the New York City Panel on Climate Change, sea levels in the New York City area could rise by up to 31 inches by the 2050s.

In addition to stabilizing rates over multi-year rate plans, today’s ruling includes a number of critical elements advocated by Attorney General Schneiderman. These include: requiring the immediate implementation of storm-hardening and resiliency projects and supporting an ongoing collaborative discussion among the parties on how to best evaluate risk to the system; developing a risk-cost benefit evaluation model to look at flood-protection design standards and other projects related to cost-effective storm-hardening; exploring additional resiliency initiatives such as distributed generation; increasing the replacement of leak-prone gas pipes; measuring methane losses in the company’s gas system, and facilitating the switch from highly polluting heavy heating oil to natural gas for building heating.