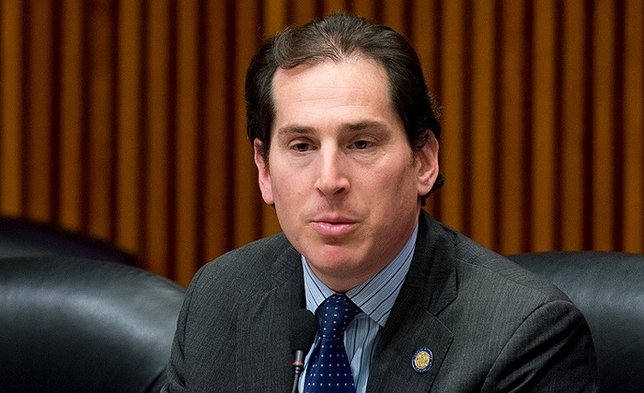 “As one of your constituents, I'd appreciate it if you would be mindful of the service (or lack thereof) that the Long Island Rail Road has been providing of late. Yesterday evening 2/7/17 the entire signal system at Atlantic Terminal went down forcing all commuters to go to Penn and overcrowding those trains. This morning, some derailment occurred near Jamaica interfering with the morning rush with delays and cancellations. What is happening with the infrastructure as MTA continues to raise fares.”

“My constituents are just describing and living through atrocious service by the Long Island Railroad,” said Senator Todd Kaminsky during the hearing. “Instead of going in a direction where things get better, it seems like you're moving backwards.” 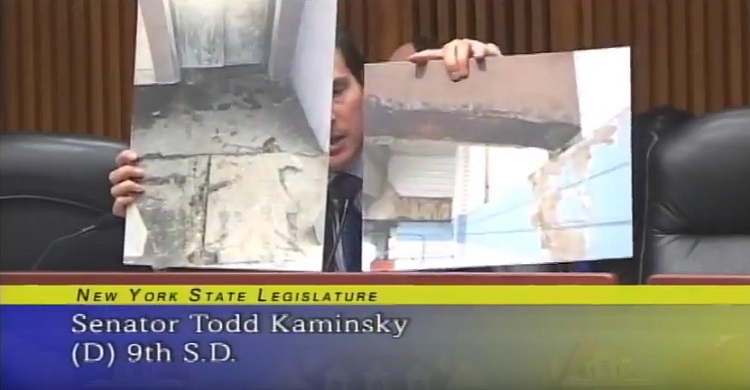 Pictured still-shot from hearing video. Senator Kaminsky holding up pictures to show the state of some LIRR stations.

Kaminsky also showed pictures of the dismal state of two LIRR stations - Lynbrook and Rockville Centre - in his district and pushed Hakim on why there are no plans to renovate them.

“This state of neglect for the Lynbrook and Rockville Centre LIRR is disappointing,” said Senator Todd Kaminsky. “I urge the MTA to renovate these stations as quickly as possible. I will keep advocating until they are overhauled.”

Despite the stations having crumbling staircases, floors and walls, the MTA has yet to allocate funding for renovating the Lynbrook and Rockville Centre LIRR stations. A 2006 Origin and Destination Study found that on the average weekday approximately 6,850 passengers board a train at Rockville Centre, making it the 12th most used LIRR station out of 122. The same study found that Lynbrook had on the average weekday 5,476 passengers and was ranked 22nd.

You can view and download the hearing video here as a mpeg file.