The Northport VA Medical Center recently hosted the Chapel of Four Chaplains Legion of Honor Awards at the Little White Chapel to pay tribute to 12 people known for their dedication to giving back to ... 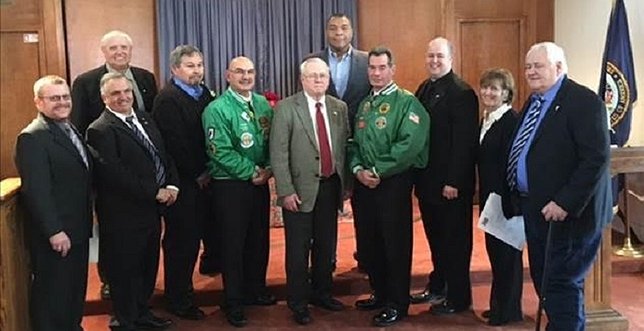 Chapel of Four Chaplains Legion of Honor Awards pay tribute to people known for their dedication to giving back to others. Legislator William R. Spencer, M.D. and 11 others were distinctly honored to receive this recognition.

Northport, NY - February 14, 2017 - On Sunday, February 5, 2017, the Northport VA Medical Center hosted the Chapel of Four Chaplains Legion of Honor Awards at the Little White Chapel to pay tribute to 12 people known for their dedication to giving back to others. Legislator William R. Spencer, M.D. was distinctly honored to be one of those chosen to receive this recognition.

The Legion of Honor Award was first created by the Chaplain of Four Chaplains, a non-profit organization formed in 1943 after the USAT Dorchester, a troop ship sailing in the North Atlantic, was struck down by a torpedo. While the ship was actively going down, the four chaplains aboard, George Fox, Alexander Goode, Clark Poling, and John Washington, remained calm and guided the other 902 men to lifeboats. When the life boats were full, they handed out life jackets and when the jackets were gone, they gave away their own to those who had none. The ship sank with the four chaplains as they linked arms.  Inspired by their immense selflessness, this group was founded and the Legion of Honor program continues to honor their spirit by publicly recognizing those whose lives model the kind of service to community, nation, and humanity exemplified by the Chaplains.

“With distinguished careers, volunteer efforts, and in some cases, acts of heroism, I cannot believe I was included in this long tradition,” said Legislator Spencer. “Receiving this recognition is humbling and has truly inspired me to continue to work for the good of our community.

Since its inception, many notable American figures have been recipients of the Legion of Honor Award including Presidents Harry Truman, Dwight Eisenhower, James Carter, and Ronald Reagan. Also honored in the past were, Bob Hope, John Glenn, Mickey Rooney, Martha Raye, James Michener, Marian Anderson, C. Everett Koop, Tommy Lasorda and Shirley Chisholm as well as deserving military personnel, veterans, and civilians from all walks of life.