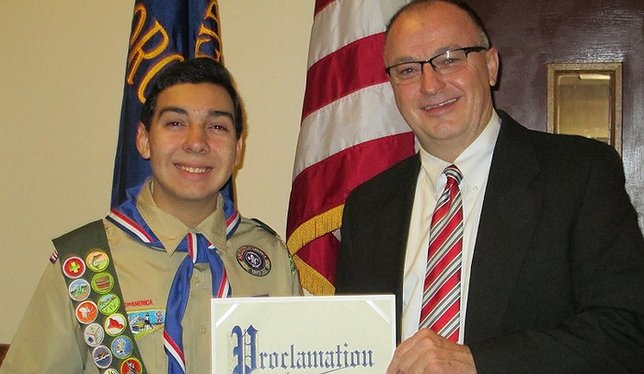 Smithtown, NY - February 8, 2017 - Suffolk County Legislator Rob Trotta congratulated Eddie DePinter, Jr., a second generation Eagle Scout, at his recent Eagle Scout Court of Honor. Eddie, a resident of East Northport, earned the distinguished rank of Eagle Scout through his commitment to the community, as well as the completion of his Eagle Scout Project, which involved building a four-sided bench made of mahogany with an opening in the center where he planted a pear tree. The bench is located near the athletic fields at Northport High School. It was built in memory of 2004 graduate and Eagle Scout, Cpl. Christopher Scherer, USMC, who died courageously in Iraq in 2007.

“Your pledge to your community has been evident since you joined the Boy Scouts. By becoming an Eagle Scout you have achieved a goal that will be respected by everyone you meet. Your accomplishments should be an inspiration to the younger scouts as a sign that they can do it, too,” said Suffolk County Legislator Trotta. “I wish you the best of luck when you enter Pace University, and when you graduate, I urge you to stay on Long Island and continue to be an integral part of your community,” added Legislator Trotta.