Treacherous winter weather has led to major delays on the LIRR and buses in Nassau and Suffolk. 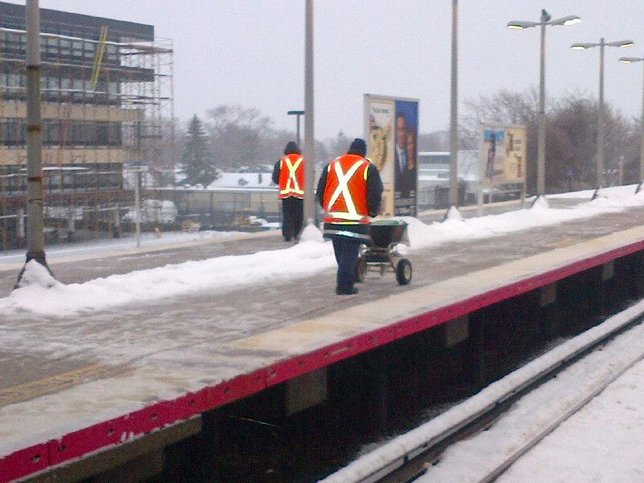 Earlier today, Governor Cuomo declared a State of Emergency for all of New York State as the snow, ice, and freezing rains build on our roadways. New Yorkers are being urged to stay indoors and off the road if you don’t need to leave your house. The combination of 4 to 6 inches of snow, and the freezing rain this morning, have resulted in treacherous conditions.
Yesterday afternoon, it was announced that four hundred tons of salt would be provided to towns across Long Island by the NYSDOT in to prepare roadways for today's storm, as well as respond to the severe icing that has been creating driving hazards on local roadways across the Island. So far this winter, over 46,000 tons of salt have been used to de-ice the roadways. Typically 30,000 are used in the entire season. To get the scoop on local traffic before you head out, please visit the LongIsland.com Traffic Cam Center, where you can view local road conditions in real time.
With the dangerous weather conditions, come the expected delays. The Long Island Rail Road and buses in Nassau & Suffolk, have had a tough time staying on schedule today as railways and roadways have been coated with ice, and snow faster than it can be removed.
Here's the latest transit updates for Long Island:
Nassau County NICE Buses
The Nassau County NICE Bus Twitter Page has been active in reporting the day's major issues. One of the major problems buses face are flooded roadways caused by poor drainage. Overall there are no detours and officials are saying to expect 15 to 20 minute delays throughout the day.
The following are the major issues NICE Buses are currently facing as of 12:30 PM:
Suffolk County Buses
Suffolk County Transportation is reporting major stoppages on routes.
The following routes facing the most issues due to the weather:
The following routes are now on Sunday schedule:
Long Island Rail Road
The Long Island Rail Road has called on extra personnel to deal with today’s conditions. They are paying close attention to the accumulation of ice, downed trees, and whatever else can obstruct the track.
The personnel is equipped with chainsaws and heavy equipment clear anything up. Diseal locomotives are ready at major junctions to assist any trains which have become disabled. The LIRR has implemented rail heaters, and special work trains in place to apply anti-freeze on the third rail. Platforms have also been pre-salted and cleared up for today’s commute.
Currently, Port Jefferson, Ronkonkoma, and Oyster Bay are experiencing The most delays, although service between Jamaica and Mineola is experiencing delays of up to 1 hour and 40 minutes.
Day and night, the local transit authorities are working to get travelers where they need to go in a timely and safe manner. Be sure to check back for the most recent updates before you hit the road if you do plan on traveling today, and as a safety precaution, only travel is absolutely neccessary.
Do you know of a delay not listed above? Comment below to share!
[Source: LIRR, SCT, NICE Bus, MTA, Governor Cuomo]