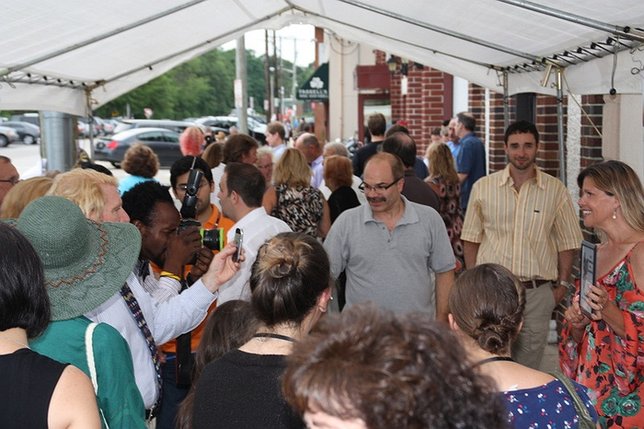 Bellmore, NY - February 3rd, 2016 - Nassau County Film Commissioner Debra Markowitz recently announced that Filmmaker submissions for the 2016 Long Island International Film Expo are now open! Filmmakers are encouraged to submit online via FilmFreeway.com, which provides cost-saving, paperless submission to film festivals around the world. LIIFE is the premiere filmmaker community on Long Island sponsored by the Long Island Film/TV Foundation (LIFTF) and the County of Nassau, which shows 150 - 170 short and feature-length films of every genre from the world over.

With a heavy celebrity presence, visits in past years have included a wide range of noted actors and actresses including Steve Buscemi, Ralph Macchio, Ally Sheedy, and so many more. Focusing on the incredible talent of some of the best independent filmmakers, the expo offers networking opportunities, a 350 seat historic theater, press and media opportunities, a convenient filmmakers lounge and several discussion panels with topics ranging from distribution to scriptwriting, legal music, and a filmmaker panel/breakfast.

With this year’s Expo set to be held from July 13 – 21, 2016 at the historic Bellmore Movies (222 Pettit Avenue, Bellmore, NY  11710), submissions will be considered for awards & prizes in categories ranging from Best First Film to Best Documentary, Best Student Film, Best Long Island Film, Best Animation, Best Feature, and a wide array of others.

Named “One of the Top 25 Coolest Film Festivals in the World” by MovieMaker Magazine, LIIFE is one of Long Island’s most prestigious film festivals, screening approximately 150 independent films during its weeklong run. The Long Island Film/TV Foundation, a not-for-profit, is also the foremost group providing support to the film/TV and commercial industries on Long Island, and will be honoring several noted professionals in the film/entertainment/media industries this year including Angela Anton (Anton News – Humanitarian Award), Robert Clohessy (Actor- Blue Bloods – Creative Achievement Award), Sal Rendino  (Actor – The Get Down/Billions – Rising Star Award), with more to be announced.

Last year, LIIFE scheduled 165 short and feature-length quality independent films from around the world, including many from right here on Long Island. Past successes have also included- films such as Michael Cuesta’s LIE starring Brian Cox and Paul Dano screened at the Malverne Cinema with its Long Island Premiere; Tate Taylor (Director of Pretty Ugly People), who won Best Feature and has gone on to act in Winter’s Bone, to direct The Help and the James Brown movie, Get On Up; Julian Adams who won Best Film for The Last Confederate and has since went on to direct Phantom- starring David Ducovny and Ed Harris, and Rick Bieber, who has LIIFE awards for multiple films including The Fifth Quarter and Crazy, also producing such notable films at Flatliners and Radio Flyer.

Serving three administrations during her 28-year tenure, Ms. Markowitz has steadily increased production of movies, television programs and commercials that are shot in Nassau County, logging over 1000 production days and over $400M in positive economic impact. Under her auspices, Nassau County currently ranks #2 in New York State for the amount of documented production days, second only to New York City.

Ms. Markowitz also serves as Vice President of the Long Island Film/TV Foundation, Long Island's most established and largest not-for-profit agency dedicated to the support and promotion of independent filmmaking. Under her directorship, the Foundation spawned the Long Island International Film Expo (LIIFE). Heading into its 19th year, LIIFE enjoys enormous popularity, attracting short and feature-length independent films from around the world, spotlighting films made on Long Island and concluding with a star-studded award celebration. An enthusiastic filmmaker herself, Ms. Markowitz, an award winning filmmaker, has acted as Casting Director, consultant, writer, director and producer on movie, television and commercial projects.

On her involvement with the expo, Ms. Markowitz recently stated "It's exciting to see LIIFE become such a premiere film community on Long Island. Having several of my own films on the festival circuit and seeing what other film festivals do to serve the filmmakers, I see how important LIIFE is to fostering a cohesive festival family for foreign, domestic and, of course, our own local filmmakers."

With submissions NOW OPEN THROUGH MARCH 1ST for this year's Long Island International Film Expo, filmmakers are encouraged to enter what the Audience Awards has called “One of the Top 10 Hottest Summer Film Festivals in the United States” and join in the fun July 13th – 21st.

To submit to the Long Island International Film Expo, visit Film the Freeway, or Without A Box. For more information on LIIFE, please visit the official website.