"Each time the alarm sounds, the individuals here today put their lives at risk for strangers they may never know." 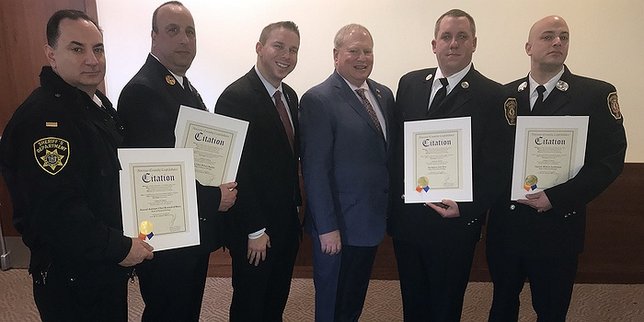 Mineola, NY - February 1, 2019 - During the Monday, Jan. 28 meeting of the Nassau County Legislature, Legislators Joshua Lafazan (Woodbury) and Arnold W. Drucker (D - Plainview) saluted four Syosset Fire Department volunteers for their life-saving actions in response to a recent fire at senior living complex.
Josh Kerr, acting officer of Engine 584, ex-chief Robert Kaplan, officer of Ladder 5855, Capt. William Sauberman, officer of Engine Company 5 and Second Assistant Chief Kenneth O’Brien first responded to an automatic carbon monoxide detector alarm at the Woodbury apartment complex at 3:53 p.m. on Sunday, Jan. 6 and quickly determined the apartment was on fire.
Battling heavy smoke, firefighters discovered the victim after hearing a groan from the kitchen, according to published reports. After being evacuated and treated by Syosset Fire Department EMS members, the victim regained consciousness while being transported to Nassau University Medical Center.
“Each time the alarm sounds, the individuals here today put their lives at risk for strangers they may never know and people they may never meet,” Legislator Lafazan said. “No matter the conditions, they perform with professionalism. I’m honored to call you heroes in my community.”
“I am in awe of your bravery on a daily basis,” Legislator Drucker added. “I’ve watched you risk your lives without hesitation, and you do it with such natural instinct. It is just breathtaking,” Legislator Drucker added. “You are true heroes - our communities are safer, and we sleep at night better because of the work you do.”