Inclement weather and precipitation coming, but little or no accumulation is expected, reports say. 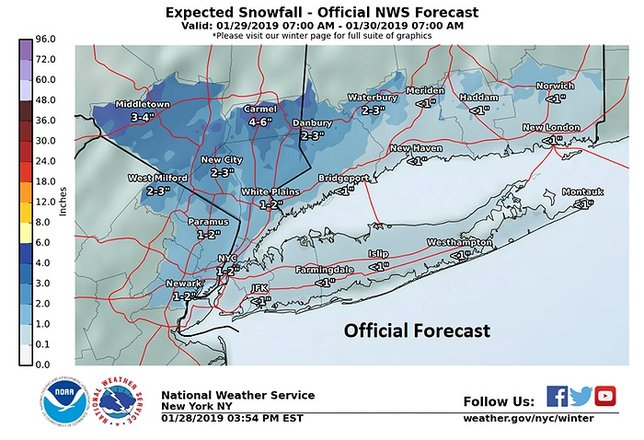 A map of precipitation projected for tonight in the Long Island region, according to the NWS.

Long Island, NY - January 29, 2019 - Winter has certainly been making its presence strongly felt on Long Island recently, and according to the National Weather Service, it’s about to get even chillier, with rain, snow, and temperatures in the teens or even lower in the forecast by the end of the week.
Tuesday started out gloomy with cloudy skies with highs in the low-to-mid 40’s, but that is set to change over the course of the afternoon and into the evening, as rain is expected to creep into the forecast before switching over to snow during the night. However, little or no accumulation is expected, NWS reports, although up to an inch of snow is possible in some areas depending on prevailing weather patterns.
Very light snow was reported in various regions of Long Island this morning, but again, there was no accumulation.
Rain is anticipated to begin after 2 p.m. this afternoon, NWS says, and it is possible that this will transition partially over to snow for a wintery mix during the evening commute; this is expected to especially affect the western region of Long Island. The forecast is for rain to continue until at least midnight, at which time it is likely that it will switch over to a brief period of snowfall with overnight lows in the 20’s. This will possibly result in icy conditions come Wednesday morning, and motorists are urged to be cautious during the morning commute if this is the case.
Wednesday sees temperatures with highs projected in the low 30’s and heavy winds, with a chance of more precipitation in the late afternoon/early evening possible, including the possibility of snow.
However, the bigger news is the very cold air mass that is trailing the precipitation; expected to hit the Long Island area on Thursday, NWS are stating that temperatures will drop into the single-digits in the morning with a high for the day only in the mid-teens…and that’s before taking wind chill factors into consideration, which should produce frigid, potentially dangerous conditions. Residents are cautioned to heavily bundle up if they need to head outdoors on Thursday to avoid hypothermia and frostbite. 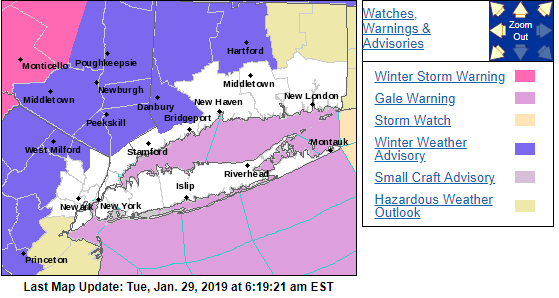 Photo Credit: National Weather Service
Here is the official weather forecast for the remainder of the week, as per the NWS: