The money will go towards the school’s Tulip Knoll endowment capital improvements, including a new state-of-the-art STEAM Center. 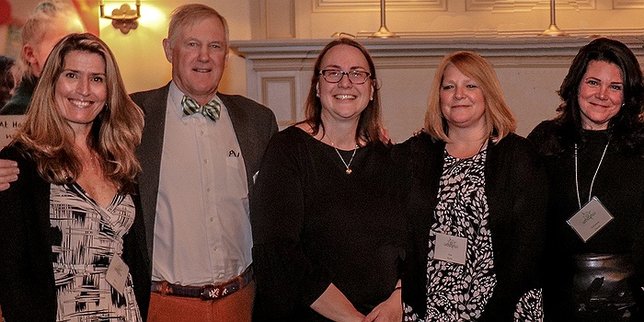 Harbor Country Day School has launched a $10 million capital campaign that will go towards the school’s Tulip Knoll endowment and a new STEAM Center.

St. James, NY - January 28, 2019 - Harbor Country Day School announced today that it has launched a $10 million capital campaign, the first of its kind in the 61-year history of the independent school. Of the $10 million goal, $6.5 million will be earmarked for the school’s Tulip Knoll endowment (named after the historic mansion that houses the school) and $3.5 million will go toward capital improvements, including a new state-of-the-art STEAM Center.
During the silent phase of the campaign, the school raised $4.6 million, led by two gifts totaling $2.7 million, both made by donors who wish to remain anonymous.
“This campaign marks a truly historic time here at Harbor Country Day School,” said Head of School John Cissel. “To have already raised nearly $5 million for the school is remarkable. Now, as we enter the public phase of this campaign, we are thrilled to go full-steam-ahead on this path to make Harbor Country Day the premier independent elementary school on Long Island.”
Mr. Cissel continued: “As we are riding the wave of a 77% increase in enrollment over the past eight years -- at a time when many independent schools are facing declining enrollment -- there has been no better time for us to take this momentous step for our students and for future generations of Long Island children.”
The $6.5 million endowment piece of the campaign will be divided into three separate endowments: the Tuition Assistance Endowment, which will support the school’s efforts to provide financial assistance to families in need; the Faculty Endowment, which will help fund the recruitment and retention of Long Island’s most skilled educators; and the General Endowment, which provides supplemental funding for the school’s most fundamental operational needs.
The $3.5 million campaign goal earmarked for capital improvements will include funding for a cutting-edge STEAM Center, which will house new state-of-the-art science labs, a MakerSpace studio, a new library, an art studio, and a wood shop. Other capital improvements include a renovated parking lot and new and reorganized classroom space.
“Our STEAM program is one of our key signature programs, and as such it is a program in which we will be making considerable investments with this campaign,” said Mr. Cissel. “Along with the STEAM Center, the other building modernizations will enable our teachers and students to work together more seamlessly, which also aligns with our STEAM philosophy of encouraging cross-curricular collaboration and problem-solving in a natural, authentic way.”
Harbor Country Day School was established in 1958 on a foundation of philanthropy, as a group of several families gathered together and raised the funds necessary to create an independent school that would offer their children an alternative to the education the public schools schools provided at the time. Since that day, Harbor Country Day’s parent and alumni communities, as well as its board of trustees, have been a constant source of support for the school through the years.
“This campaign is the actualization of a remarkable strategic vision for the future of Harbor Country Day School, and the board of trustees is honored to have played a role in developing that vision,” said Corinne Hammons, chair of the Harbor Country Day School Board of Trustees. “I’m pleased to announce that 100% of the board has contributed to the silent phase of the campaign, and its commitment will continue throughout the entire campaign and beyond. This is going to be an incredible journey.”
About Harbor Country Day School
Founded in 1958 by conscientious parents, Harbor Country Day School (www.hcdsny.org) is an independent, co-educational day school for children from preschool through 8th grade situated in St. James’ Village of Head of the Harbor. The school employs a whole-child approach to education, wherein its rigorous curriculum is supported by a broad program in its academic, athletic, advisory, and visual and performing arts departments designed to develop all aspects of each child's talents and interests. Harbor Country Day School’s summer camp program, Camp Harbor, is among the leading summer camp programs on Long Island. The school’s mission to “cherish childhood, cultivate wonder, and inspire confident learners and leaders” underscores every child’s experience at Harbor Country Day School and ensures that all of its graduates are prepared to lead fulfilling lives filled with wonder, confidence, and many successes.
Harbor Country Day School is chartered by the New York State Board of Regents and is accredited by and a member of the New York State Association of Independent Schools (NYSAIS). It is a non-sectarian, nonprofit organization under section 501(c) (3) of the IRS Code governed by a self-perpetuating board of trustees. For more information, visit www.hcdsny.org.