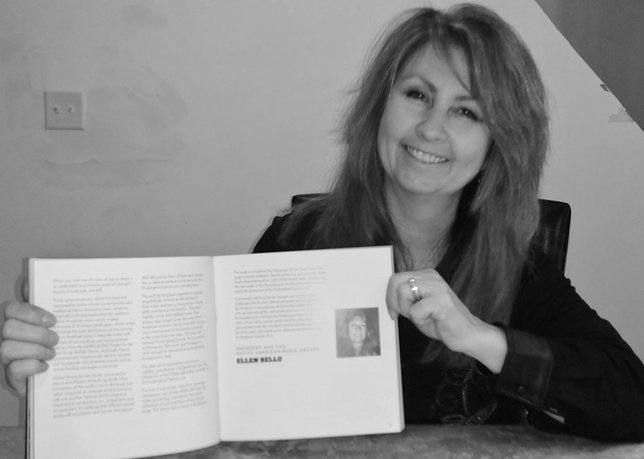 Lindenhurst, NY - January 22nd, 2014 - Long Island resident and founder of the Native American Music Awards & Association, Ellen Bello, has recently contributed to a book entitled, Wild Success, The Endangered Species Act at 40 celebrating 40 years of the Act and has produced a national CD featuring Native American and international recording artists to benefit wolves as an endangered species and the NY Wolf Conservation Center in South Salem, NY.
Ellen is among other voices for wildlife who contributed to Wild Success which was published by the Washington DC-based, Endangered Species Coalition including; actor Ed Begley Jr, executives from the World Wildlife Fund, Defenders of Wildlife, Greenpeace, Pulitzer Prize Winner Mary Oliver, Explorer and Environmental Advocate Phillippe Cousteau, and the late President Richard Nixon who signed the Act in 1973. The Coalition has shared the book with important decision-makers at the Library of Congress in Washington, DC and honored Endangered Species Act heroes which included many members of Congress.
Ellen's book contribution expresses the close relationship Native American musicians hold with nature. She states, "Native American song is integrally linked with our natural surroundings and various animal species." She closes by commending the Endangered Species Act and reminds us, "As humans, only we have the ability and power to protect our wildlife from facing extinction."
Following her contribution, Ellen collected songs about the wolf performed by Native American Music recording artists for a special benefit CD entitled, WOLF. Featured artists and wolf clan members from across America include; Davide Buzzi of Switzerland, Austrian-based group Big City Indians, Los Angeles-based The Gray Wolf Blues Band (Yaqui), Jack Gladstone (Black Feet), Jan Michael Looking Wolf (Kalupa), world music duo Painted Raven, Joanne Shenandoah (Oneida), Joseph FireCrow (Northern Cheyenne), The Plentywolf Singers (Lakota), and Cal Silverfox who is raising wolf pups among others.
The concept behind the CD was sparked when NAMA Founder, Ellen Bello, visited the New York Wolf Conservation Center and revisited with Artic Gray wolf, Atka, who she saw at a convention on Long Island a year prior. Atka is featured on the cover of the WOLF CD was was recently featured on NBC Nightly News with Brian Williams.
The NY Wolf Conservation Center also has two other Ambassador wolves, Canadian/Rocky Mountaiin Gray wolves Zephyr and Alawa. An ambassador wolf is an exhibit wolf tasked with inspiring adult and children to understand the importance of wild wolves. The Center is also home to five red wolves (Canis rufus), and 15 Mexican Gray wolves (Canis lupus baileyi). The Mexican gray wolf and the red wolf are among the most rare mammals in North America. Presently, there are approximately 400 Mexican gray wolves and fewer than 300 red wolves remaining in the world.
The WOLF CD was released nationally on Thursday, January 16th, retails for $9.99 and is available at Amazon.com. A digital download version featuring extra bonus tracks is also available on the Native American Music Association's website, www.namalive.com All proceeds from the CD will directly benefit the NY Wolf conservation center in South Salem, NY.
The CD aims to honor and pay tribute to the wolf and preserve its existing protections as an endangered species.
The U.S. Fish and Wildlife Service has recently proposed rules that would remove the gray wolf from the list of endangered and threatened species nationwide, and turnover the ongoing management of wolf populations to local states. The Service aims to focus instead on protecting the Mexican wolf, an endangered subspecies which the Service has claimed is the only remaining population that needs the protection of the Endangered Species Act.
Environmental and Wildlife groups call the move to nationally delist wolves premature, and claim that stripping protections from wolves will hinder their recovery which has not yet been accomplished. They point to states such as Montana, Wyoming, Idaho, Wisconsin and Minnesota where delisting wolves has been followed by mre than 1,100 wolf killings and reduced the national population by 7 percent. The state of Idaho has just voted to kill two wolf packs.
Gray Wolves once ranged across the entire North American continent in the hundreds of thousands before facing extinction. Today, Native American wolves continue to be endangered and total only 5,000 to 6,000 in the lower 48 states.
Wolves once roamed throughout New York and New England, playing an important role in preserving the biodiversity of the region. By preying on deer, moose and smaller predators, wolves kept herds healthy, prevented overbrowsing of the forest and protected habitat for small mammals and ground-nesting birds. But the wolf has been silent in the Northeast for nearly a century.
Persecution of the northeastern wolf began in 1630 and for the next three centuries, as settlement extended across the continent, hunters shot, poisoned, trapped, and brutally killed wolves. Scientists now understand that wolves are important to ecosystems. Gone from the Northeast for more than a century, and many ecologists fear we may not realize the full ecological impacts of the wolf's absence for generations to come.
The majority of Native American tribes are opposed to killing wolves and recognize the wolf's important role in keeping nature balanced. Wolves figure prominently in legends and mythology of nearly every Native American tribe.
The late Albert White Hat, a teacher of the Lakota language and advisor on the movie Dances with Wolves, spoke of the concept of Mitakuye Oyasin...all my relatives....
"Everything in creation is a relative, no different than your aunt, uncle, brother, sister, grandmother, grandfather or parents. All of society needs to understand that if a family member is dying that we, as a good relative, do everything we can to support their battle to live. "
Ellen Bello is originally from Dix Hills and currently resides in Lindenhurst, Long Island.  She has previously been featured in the NY Times, Billboard, and LA Times for her work with the Association.