“Anticipatory shipping” would bring items near customers before an order is even placed; Google's contact would help those with diabetes. 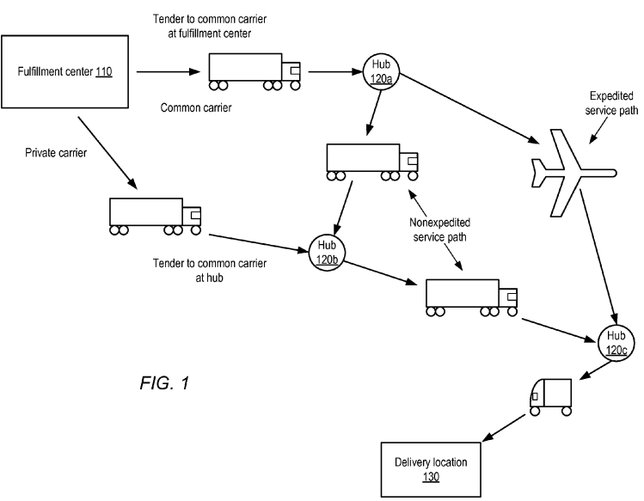 Amazon already made headlines late last year when it announced the development of Prime Air—a delivery service which will use unmanned drones to provide same-day delivery on thousands of items sold by the website. Evidently dropping off a new pair of headphones or Blu-ray player half an hour after being ordered may not be quick enough for the ecommerce giant, however, as a recent filing with the US Patent Office reveals plans for a practice Amazon calls “anticipatory shipping.”

It does not appear that the company will be dropping off products at anyone’s door before they are paid for, but if anticipatory shipping proceeds as outlined it will come fairly close to doing so. Under this system, Amazon would send goods out to specific geographical areas where sales data indicates they are liable to be purchased; once an order is actually placed for the items in the area they would be rerouted to the respective customer for final delivery.

Of course, not every patented idea comes to fruition and it is not unusual for large companies to claim ownership of a concept for the simple purpose of disallowing competitors from using it, but with delivery drones already well past the initial concept phase of it would hardly be farfetched for Amazon to actually roll out anticipatory shipping as well.

In an unrelated motion, Google is taking a new twist on one of its developmental technologies as well. Project Glass was announced in April of 2012, and since that time the company has slowly begun testing and distributing prototypes of its heads-up display in a slow push towards an eventual commercial release. Google Glass shares many of the same functions as smartphones and other smart devices, but projects a small viewing screen onto the lens of the operators’ glasses for a wearable tech experience that can be put in their field of vision as they go about other day-to-day tasks simultaneously.

As work on the lens continues, Google hopes to be able to use it to measure glucose levels by continuously monitoring the tears any contact lens would normally be in contact with. If successful, this could potentially replace painful blood tests for many people who suffer from diabetes, and provide more consistent feedback on their present condition.

“Over the years, many scientists have investigated various body fluids—such as tears—in the hopes of finding an easier way for people to track their glucose levels,” said project co-founders Brian Otis and Babak Parviz. “But as you can imagine, tears are hard to collect and study. At Google, we wondered if miniaturized electronics—think: chips and sensors so small they look like bits of glitter, and an antenna thinner than a human hair—might be a way to crack the mystery of tear glucose and measure it with greater accuracy.”

The smart contact lens is still very much in the early stages of research and development, but Otis and Parviz promise to continue working on it, to seek outside partners with expertise in the medical technology field, and to remain in discussions with the FDA to build a functional medical tool. When complete, the lens may communicate its readings with apps accessible by patient and doctor alike, and Google is also considering using tiny LED lights to act as an early warning system when glucose levels begin to dip or spike too much.