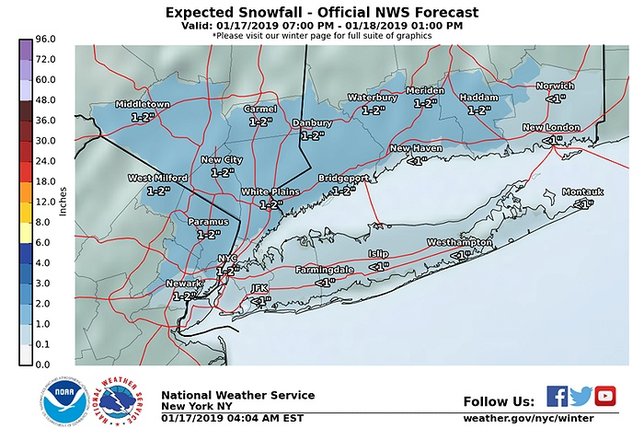 A chart of projected snowfall totals in the Long Island region Thursday night into Friday morning.

Long Island, NY - January 17, 2019 - After a winter packed with frigid temperatures but a general lack of snow so far (although it's still early in the season), Long Island may actually be getting a little snowfall this weekend, according to reports from the National Weather Service.
Snow is in the forecast for late tonight into Friday morning. Accumulations will range from a coating to an inch across Long Island to 1-2 inches north and west of NYC. Slippery roads may impact the Friday morning commute, especially across the interior, reports say.
As late afternoon progresses into evening, temperatures are expected to drop into the 20’s with snow developing towards midnight into Friday morning with a wintry mix. Precipitation occurring between approximately 10 p.m. tonight and 2 a.m. Friday morning will result in a slushy coating for Long Island which could increase the danger of slick and slippery roadways, so drivers are urged to take caution.
As Friday morning progresses, the wintry mix is expected to change over into heavy rain that is expected to last throughout the remainder of the morning.
While tonight's forecast is pretty much a lock, according to NWS, what's in store for Long Island come Saturday night is slightly less certain; however, snow is sure to be involved, and possibly in much greater amounts that we've seen previously this winter.
Snow is expected to develop Saturday night after 7 p.m., which could potentially result in several inches of precipitation; this is expected to transition over to extremely heavy rain , and then once again over to freezing rain and snow. That, combined with heavy winds, is expected to cause potential coastal flooding in some areas; residents of affected regions are expected to exercise caution in the event that happens.
Temperatures on Sunday are expected to be especially cold, and with the excessive rain and snow in the forecast Saturday night, this could result in extremely icy conditions on streets and roadways. Residents are urged to take extreme caution if driving anywhere because of this.
PSEG Long Island has announced that they are closely monitoring and ready for the forecasted weather expected to affect their service territory over the next few days. PSEG noted that they are performing system checks on critical transmission and distribution equipment and logistics checks to ensure the availability of critical materials, fuel and other supplies.
Be prepared and stay safe during extreme weather:
Governor Andrew M. Cuomo today urged New Yorkers to prepare for multiple storm systems that are forecasted to bring significant snowfall as well as bitter cold and dangerously low wind chills.
"While New Yorkers are no strangers to snow, I am urging everyone to be cautious over the next several days as current forecasts are calling for the most significant snowfall so far this winter," Governor Cuomo said. "All of New York's transportation and public safety agencies are monitoring these storms closely and are prepared to immediately assist any community that needs help."
The current weather forecast for throughout this upcoming weekend is as follows: