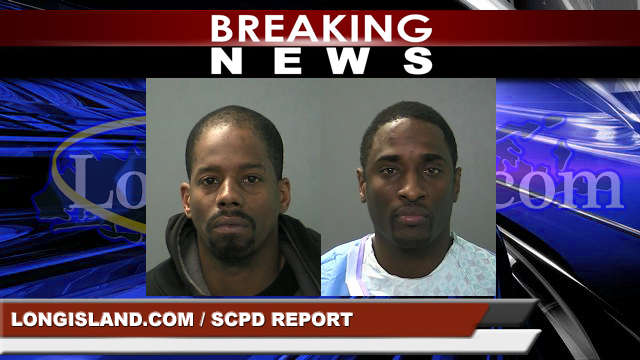 (left) Murray Hawkins, 35, of Laurelton, and (right) Kevin Highland, 35, or Jamaica were arrested and charged with Robbery and Unlawful Fleeing a Police Officer.

Murray Hawkins and Kevin Highland robbed Capital One, located at 1701 Sunrise Highway, at approximately 9 a.m. on January 13. The two fled the scene in a 2015 Ford Escape, driven by Highland, and were later observed by patrol officers in Wyandanch at approximately 9:15 a.m.

When officers attempted to pull over the vehicle, Highland failed to comply and led officers from Suffolk County, Nassau County and New York State Police on a pursuit that traveled northbound on Bagatelle Road to the Long Island Expressway to northbound Route 135 where Highland exited onto Jericho Turnpike and crashed into a Nassau County police vehicle at approximately 9:30 a.m.

Hawkins, 35, of Laurelton, and Highland, 35, of Jamaica, will be arraigned today at First District Court in Central Islip.