Statement from Assemblyman Dean Murray: "Getting Back to Work"

Assemblyman Dean Murray issued a statement on "Getting Back to Work" for 2016. 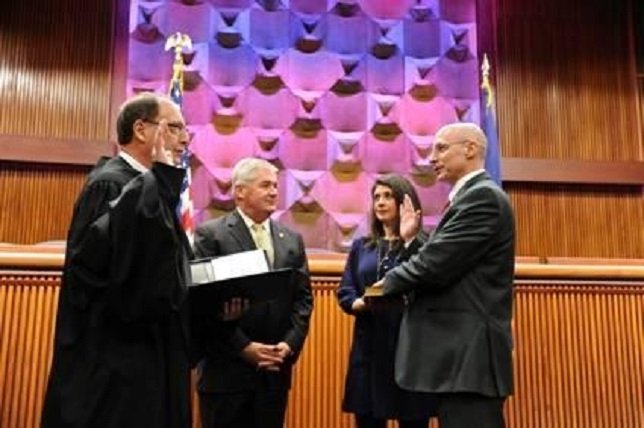 Assemblyman Dean Murray (far right) being sworn in as assemblyman for the 3rd District as his wife, Amy, holds the Bible. He was sworn in by Judge Kevin Engel and also joined by Assembly Minority Leader Brian Kolb.

“As the 2016 Legislative Session gets underway, I am excited about the many opportunities ahead of us. However, I believe there are two major priorities that need to be addressed before we go any further: ethics reform and education.
“If 2015 taught us anything, it is that a major ethics overhaul is needed in our government. To hold an elected office is to be held to the highest standards, and any abuse of one’s position should be handled with appropriate justice. We can ensure a transparent and effective government by stripping pensions from public officials convicted of felonies related to their positions. Abusing your authority to commit felonies should result in the full loss of benefits pertaining to your position, it’s plain and simple.
“Equally as important are education issues, such as scrapping Common Core and restoring the proper funding levels for our public schools. For too long, our school districts, teachers and students have suffered from unfair education cuts and the flawed funding system. We also have had to endure the nightmare of the extremely flawed Common Core curriculum. In 2016, we must eliminate the GEA (Gap Elimination Adjustment) to ensure that school funding is fully restored. We must not rest until the broken curriculum and over-testing obsession is eliminated and the children of New York state are given the educational opportunities they deserve.”