Governor Cuomo announced to a Long Island audience that New York is committed to building 2,400 megawatts of offshore wind power by 2030 – enough to power 1.25 million homes. 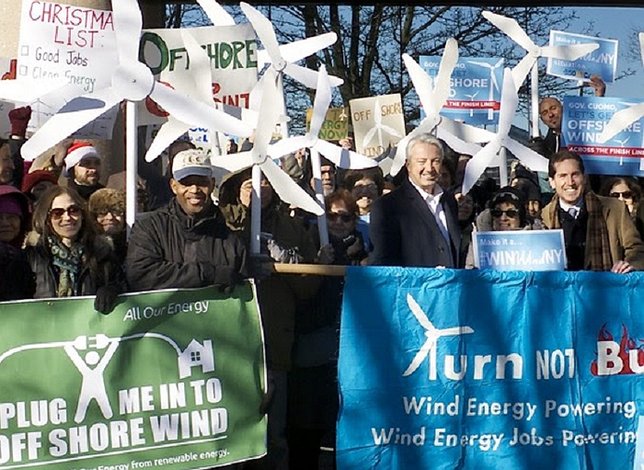 Long Island, NY - January 10, 2017 - In the most recent of the six State of the State addresses scheduled throughout the week, Governor Cuomo announced to a Long Island audience today that New York is committed to building 2,400 megawatts (MW) of offshore wind power by 2030 – enough to power 1.25 million homes. The Governor also pledged his support for New York’s first, and the nation’s largest, offshore wind project off the east end of Long Island.

In December, over 250 local, state and national organizations called on the Governor to make a commitment to a large-scale, long-term offshore wind program, hailing it as an essential first step in making Long Island a regional industry hub that could spur thousands of jobs, manufacturing and economic development opportunities. A significant commitment to offshore wind power is also critical for meeting Governor Cuomo’s goal of ensuring 50 percent of New York’s energy comes from renewable sources by 2030.

In response to today’s announcement, a coalition of organizations provided the following comments:

“We applaud Governor Cuomo for listening to New Yorkers and committing to large-scale, long-term offshore wind in New York and moving New York’s first offshore project forward,” Lisa Dix, Senior New York Representative for the Sierra Club said. “These actions are not only the biggest commitments to offshore wind in the nation, but also a historic step forward in securing Governor Cuomo’s legacy as a national climate leader, creating thousands of new jobs, and securing his goal of powering New York with 50 percent renewable energy by 2030.”

“With this week’s announcement that the Indian Point nuclear facility will be closing by early 2021, it makes more sense than ever to take advantage of the vast offshore wind resources off Long Island,” Kit Kennedy, director of NRDC’s Energy & Transportation program said. “By committing to scale up clean offshore wind power, Governor Cuomo is taking concrete action to ensure that Indian Point’s power is replaced with safe, zero-carbon energy.”

“Governor Cuomo made history today with the largest state commitment to offshore wind power, continuing the undeniable, bipartisan momentum building along the coast to tap into this booming global industry,” said Catherine Bowes, Senior Manager at National Wildlife Federation. “This bold leadership is precisely what’s needed to launch offshore wind power for New York that can deliver thousands of jobs, ensure a local supply of clean power right where it is needed and reduce pollution threatening both people and wildlife. We applaud Governor Cuomo for moving the state’s first offshore wind project forward and taking this critical step to ensure that responsibly developed offshore wind power plays a major role in New York’s energy future.”

“CCE applauds Governor Cuomo for his commitment to advance offshore wind and to fighting climate change,” Adrienne Esposito, Executive Director at Citizens Campaign for the Environment said. “Today’s commitment to offshore wind cements Governor Cuomo’s position as a renewable energy champion and ensures New York will continue to move forward with projects that mitigate climate change, stabilize the rate base and protect our coastal communities while providing good, local jobs for Long Islanders.”

“The Governor’s offshore wind announcement was an important step in the right direction. We must act now to combat global climate change and an aggressive timeline is necessary to implement and build offshore wind and other renewables,” Lisa Tyson, Director of the Long Island Progressive Coalition said.

“Offshore wind can be Governor Cuomo’s legacy. Few initiatives will have a more positive, or multigenerational impact, than capturing the clean, renewable energy blowing across New York’s shores,” Conor Bambrick, Air & Energy Director at Environmental Advocates of New York said. “The practical benefits are also immediate – a robust program can keep his climate and clean energy goals on track while mitigating the impact on the energy grid from Indian Point’s closure. We encourage the Governor to use this commitment as a springboard for making New York the world’s offshore wind leader.”

"Smart for the climate, smart on the economics, this is a significant commitment to harnessing Long Island's abundant offshore wind energy and a big step towards powering the region sustainably," NYPIRG's Russ Haven said.

“The communities of Far Rockaway and Rockaway Parkway are looking forward to the new jobs, in a new sector like offshore wind,” Alexis Smallwood, Community Outreach Coordinator, Rockaway Wildfire said. “We have fought hard for these new jobs which will help benefit those who live in Far Rockaway. We hope to save the environment and the ecosystem. Thank you, Governor Cuomo, for your leadership in offshore wind.”

"We commend Governor Cuomo for committing to the development of a large-scale offshore wind farm in New York,” Ling Tsou, Co-founder of United for Action said. “We urge Long Island Power Authority to approve the plan to develop New York’s first ever wind farm without any further delay. An offshore wind farm will not only reduce greenhouse gas emissions and the use of fossil fuel and nuclear power for New York, it will also generate jobs and stimulate local economy in the growing renewable energy sector. Given the urgency of climate change, building an offshore wind farm to deliver large-scale renewable energy cannot come soon enough."

"We are encouraged that Governor Cuomo is committing New York State to an energy future that includes offshore wind,” Elizabeth Broad, Outreach Director of New Yorkers for Clean Power said. “By prioritizing and expediting the development of this important clean energy resource, we can set an example for the rest of the nation by investing in a new industry, creating jobs and generating electricity without climate impacting greenhouse gas emissions."

"We are pleased to see the state taking this important step toward a renewable energy economy,” Kim Fraczek and Patrick Robbins, Co-Directors of Sane Energy Project said. “By agreeing to this commitment, the Governor is standing with the countless union workers, environmental advocates, and communities all over the state who are calling for offshore wind power, and we look forward to working with the Governor's office toward an eventual commitment from our utility sector to purchase 5,000 megawatts of electricity from offshore wind."