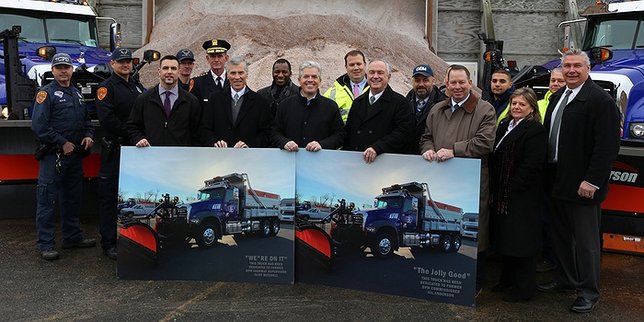 Suffolk County, NY - January 9, 2019 - Suffolk County Executive Steve Bellone today announced a nearly $5 million investment to enhance the County’s snow removal operations. The investment includes significant upgrades to the County’s fleet of snow removal equipment and beginning of construction on a new salt barn along the Nicholls Road corridor, which will expand the County’s snow removal capabilities and improve road safety during winter weather events.
“Long Islanders know all too well the importance of being prepared for a winter storm,” said Suffolk County Executive Bellone. “As we await the first snow storm of the season, our residents can rest assured that we have made the necessary investments to ensure our roads are cleared faster and more effectively, with road safety as a number on priority.”
The Suffolk County Department of Public Works purchased a total of 12 10-wheel Mack Truck Snow Plows, five of which are funded through federal grants, for a cost of $250,000 each. These new trucks are equipped with wing plows and the functionality to pre-wet the salt as it is being spread onto the road. Rather than bouncing off of the road surface or being cleared off by flowing traffic like rock salt, the pre-wetted salt clings to the pavement. This technique requires less salt, making it more effective and environmentally friendly. Two of the new Mack Snow Plows were dedicated in honor of retired Department of Public Woks Commissioner Gil Anderson and retired Highway Maintenance Supervisor Cliff Mitchell, who were vital to the County’s snow removal efforts.
The Department has also used federal grants to purchase three new pay loaders for a cost of $236,000. The pay loaders will be used to move large amounts of snow, especially on the east end, without taking any plows off of the roads. The Department has also purchased three snow blowers for $113,000 to accompany these pay loaders to help clear the roads along vast open spaces like farmland that incur significant snow drifting.
Additionally, earlier this year the County began the process of building a new salt barn along the Nicolls Road corridor, which is expected to be completed by the end of the year. The new facility will include a streamlined layout and increased capacity.
The Suffolk County Police Department also provided a demonstration of a 12-V Powered Winch that will be utilized to assist with the removal of stranded motorists along roadways throughout the county during snow storms. Powered winches are the preferred method for removing stranded vehicles as they are more reliable and greatly reduce the risk of damage to either vehicle during the towing process. The Police Department has purchased a total of four powered winches at a cost of $2,200 each, all of which were paid for with asset forfeiture funds.