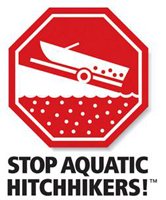 DEC will accept public comments on the proposal through February 24, 2014. The full text of the proposed regulation can be found on DEC's website.

"These proposed regulatory changes are the latest in a series of actions DEC has taken over the past few years to combat the spread of harmful invasive species, including the emerald ash borer," Commissioner Martens said. "Cooperation and assistance from the public is essential in order for these efforts to succeed. Boats, trailers and the equipment can spread aquatic invasive species from waterbody to waterbody and significantly harm recreational and commercial use of a waterbody while having a detrimental effect on native fish, wildlife and plants. This regulation is an important component of DEC's efforts to help ensure AIS-free waters remain free and additional AIS are not introduced to other waters."

Boaters are advised to carefully check their boats, trailers and equipment for any plant or animal material that may be clinging to it and remove it if found. Nuisance Invasive Species Disposal Stations are provided at many DEC boat launches for this purpose. The boat should also be completely drained, including live wells, bait wells and bilge tanks, and dried before it is used in another waterbody.

Recommended drying times for each month of the year can be calculated at http://100thmeridian.org/emersion.asp. Additional information on aquatic invasive species and preventing their spread can be found on DEC's website.

Comments on the proposed regulations can be sent via e-mail to fishregs@gw.dec.state.ny.us, or mailed to Edward Woltmann, New York State Department of Environmental Conservation, Bureau of Fisheries, 625 Broadway, Albany, NY 12233-4753. Hard copies of the full text may also be requested from Mr. Woltmann at the above address.