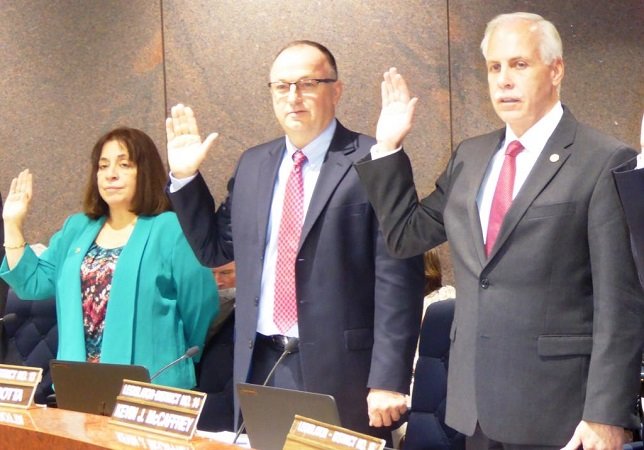 Hauppauge, NY - January 6, 2016 - At the January 4th Organizational Meeting, Suffolk County Legislator Kevin McCaffrey (R-Lindenhurst) joined his colleagues in taking the Oath of Office. This occasion officially marked the beginning of McCaffrey’s second term as Legislator for Suffolk County’s 14th District.  McCaffrey was also selected by the Republican Caucus to continue his role as the body’s Minority Leader.

The Organization Meeting is the first meeting of the year for the Suffolk County Legislature; the primary objective is to approve the year’s calendar and to swear in individuals to leadership and key administrative positions.  On hand to administer the oaths, respectively, were Suffolk County District Administrative Judge C. Randall Hinrichs and Suffolk County Clerk Judith Pascale. 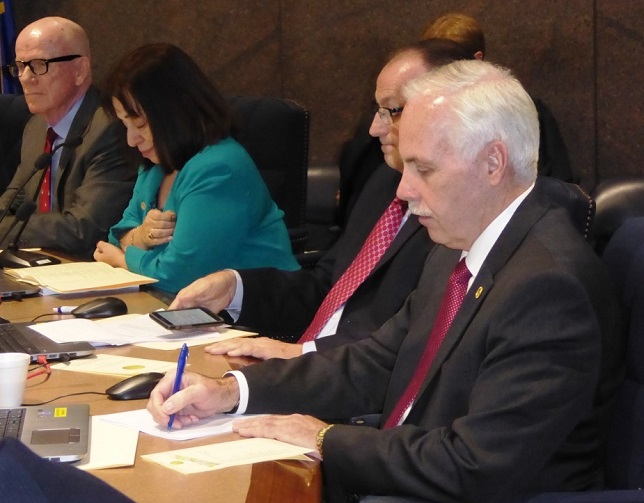 “There is a lot of work that needs to be done here in Suffolk County,” said McCaffrey.  “Although we are facing enormous challenges, both fiscal and otherwise, we can surmount them by sharing ideas and working together.  While differences of opinion exist across the aisle, we are all here to make sure the County remains a safe, healthy, and vibrant place to live for its residents and future generations.”

Although the tone of the day was certainly a positive one – County Executive Bellone, who addressed the body, even spoke proudly of the County’s falling crime rate – many issues of monumental significance must be faced in the new legislative year.  There is the lingering fiscal crisis brought on by years of out of control borrowing and spending, combined with falling tax revenues.  Additionally, questions surrounding the political appointment process of certain public safety officials must be raised in light of the recent debacle with Suffolk’s Chief of Police.

“Remaining hopeful does not mean that we should be wearing rose-colored glasses,” added McCaffrey.  “Tough questions will have to be raised and difficult decisions will have to be made.  With respect to the county’s finances, we have to reign in the borrowing and spending.  Regarding public safety, the problem is not the lack of dedicated and professional officers, in part, it is the absence of a comprehensive vetting process associated with the appointment of the top post in the department.”

During the meeting, McCaffrey hit the ground running by laying a resolution on the table titled “A Charter Law to establish minimum qualifications and screening process for appointment of Police Commissioner.”  McCaffrey indicated that this is just a first step, but a critical one.

“This is going to be a busy year in the legislature, so starting off on the right foot is important,” said McCaffrey.  “I wish all my colleagues and the residents of Suffolk County a very healthy, safe, and happy new year.”