John Andujar and Joseph Donlon have been accused of lying to a grand jury about a physical altercation with an inmate. 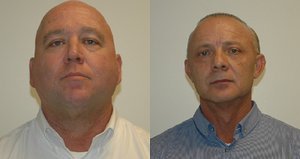 “We expect to hold law enforcement officers to the highest standards of honesty and discipline,” DA Rice said. “When that trust is broken, it unfairly taints the vast majority of law enforcement who serve honorably and we must act to correct it.”

Rice says the duo lied about an incident which involved a physical altercation on October 21st, 2011, between Officer Andujar, Officer Donlon, several members of the Sheriff’s Department, and an Inmate named David Page. The two officers claimed Page attacked Andujar in the jail’s transportation unit.

In December 2011 the two officers told a grand jury that Page spontaneously struck Andujar. The grand jury indicted Page on Felony Assault charges due to their testimony.

The case was recently overturned by the Nassau County District Attorney’s Office after the Internal Affairs division of the Nassau County Sheriff’s Department conducted an investigation based on the testimony of a witness. The witness claims Andujar removed Page’s shackles and cuffs to engage in a mutual fight.