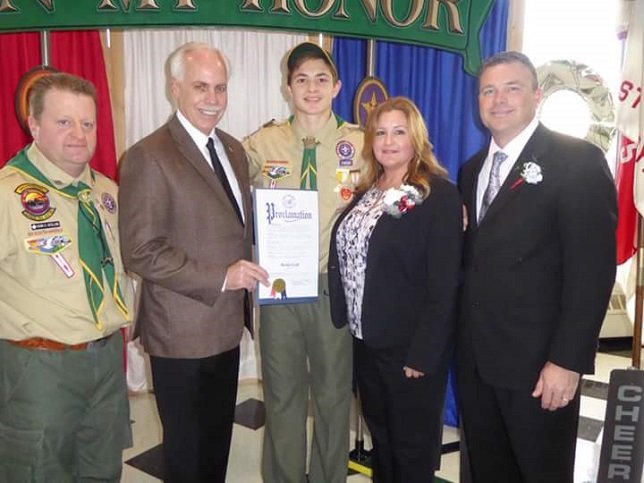 Despite the notoriety that the rank of Eagle Scout has in our society, not many people are aware of the amount of time and dedication that is required to reach this level of Scouting.  Aside from having to earn a wide variety of merit badges and acquiring new knowledge and life skills, the culmination of every Eagle Scout’s path to the rank is the planning and completion of his service project.  The service project allows the candidate to apply and further hone his skillsets, and it ultimately serves as a lasting contribution to the community.

For his service project, Justin chose to direct his talents to the ongoing effort to rebuild his community, which was severely damaged by Superstorm Sandy.  Specifically, Justin organized a beach cleanup, in addition to designing and constructing two fly traps that were destroyed by the infamous 2012 storm.  This work will go a long way in restoring the beauty of the shoreline, and allow countless individuals to enjoy the outdoors for years to come.

“The amount of work and heart put into Justin’s Eagle Scout project was nothing short of inspiring,” said McCaffrey.  “Long Island residents were hit very hard by Superstorm Sandy, and local treasures, like our beaches, sustained unprecedented damage.  The successful completion of Justin’s project should instill confidence in the community that our next generation will have fully capable stewards for our resources.”

For those interested in learning more about the Boy Scouts in Suffolk County, they are strongly encouraged to visit online.  To learn more about Troop 175 specifically, its website can be viewed here.