Gregory: "It has been a productive year for the Legislature and yet, there is always more to be done." 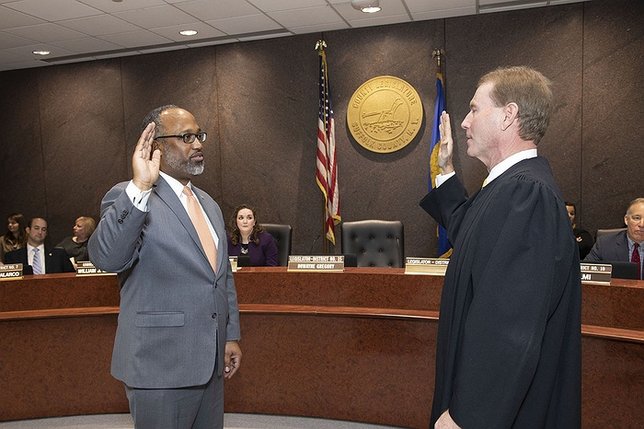 Hauppauge, NY - January 3, 2019 - Suffolk County Legislator DuWayne Gregory was reelected to a sixth term as Suffolk County Legislature Presiding Officer at the Legislature’s 50th organizational meeting, held Jan. 2 at the William H. Rogers Legislature Building in Hauppauge.
“It has been a productive year for the Legislature and yet, there is always more to be done,” said Gregory, who is legislator for the 15th Legislative District. “With a new year comes opportunity, a chance to wipe the slate clean and start anew. It offers reflection and promise, a look back and a look ahead, a way to view things differently and to inspire change. I am encouraged by the strides we have made and filled with anticipation and hope for the future. It has been my honor to serve as the Presiding Officer of the Suffolk County Legislature for the past five years, and I look forward to continuing our good work in the future.”
Legislator Rob Calarco, who represents the Seventh Legislative District, was reelected Deputy Presiding Officer for a fourth term. Additionally, a new face was sworn in as Counsel to the Legislature after the departure of George Nolan, who had filled the position since 2006 and was recently elected to serve as a New York State Supreme Court judge. Taking over the role will be Sarah Simpson, a Touro Law Center graduate who had served as Assistant Counsel to the Legislature under Nolan for 10 years.
Legislators also adopted the rules of the legislature and approved the reappointments of Jason Richberg as Clerk to the Legislature and Amy Ellis as Chief Deputy Clerk to the Legislature.
In his remarks, Presiding Officer Gregory outlined accomplishments of 2018 and priorities for the coming year. He said this past year has seen significant strides in public safety and combatting gang violence through community programs, education and outreach. In tackling the opioid crisis, Gregory pointed to the expansion of the life-saving Narcan program and to the recently-created Emergency Department Opiate Response Working Group, which will be tasked with developing and approving a protocol model for hospital emergency departments to improve the care of opiate-addicted patients. He added that the county’s mobile app, Stay Alive LI, which provides direct access to assistance for young adults who are using drugs, has been a lifeline for many struggling with drug addiction.
Gregory also praised efforts to enforce laws that prevent dumping in county parks and to allocate funding for clean-up efforts to ensure these precious assets are preserved for the next generation. In that same spirit, he vowed to continue to explore new transit-oriented development that will inject new life and taxes into areas that are struggling as well as opportunities for millennials who want to remain on Long Island but who are burdened by student loan debt and hampered by the lack of affordable housing.
Looking toward the economy and government efficiency, Gregory said the Legislature is bringing residents, employees and community leaders into the governmental process by extending opportunities to offer ideas that identify ways to make Suffolk County more competitive in business and manufacturing and to improve and enhance efficiency of county government and reduce costs.
The Presiding Officer added that he will continue to find new ways to battle homelessness and to assist returning veterans by connecting them with the services and resources they need to return to life as they left it before serving our country. He pointed to his efforts to expand the minority- and women-owned businesses law to include businesses owned by service-disabled veterans who will now be given priority in competing for county contracts.
Gregory also praised the Legislature’s support of several pieces of legislation aimed at promoting equality and human rights, including the RISE Act – Restricting Information on Salaries and Earnings – which will assist minorities and women who have historically encountered lower wages. In addition, non-English speaking residents, the deaf and those hard of hearing will benefit from a new law that requires county agencies to provide translation services to the public in six languages.
Additionally, in an effort to protect taxpayer dollars, Gregory said, several changes were made last year as to how asset forfeiture funds are monitored and used, and new amendments were adopted to the campaign finance law that will create public funding of elections in Suffolk County.
County Executive Steve Bellone offered remarks and reflections on this past year, and Oaths of Office were also administered to Suffolk County Clerk Judith Pascale and Suffolk County Comptroller John M. Kennedy, Jr., who were re-elected to their positions in November.