The Knicks and Nets went a combined 5 of 6, while the Giants played a close game and the Jets stirred up controversy.

It was inevitable that the Jets would have a quarterback quarrel this season (not to mention one so volatile it would force the retirement of Fireman Ed). If Mark Sanchez’s lackluster performance last year wasn’t reason enough, Gang Green had a fiasco on their hands the moment they traded for controversial yet beloved QB, Tim Tebow. Perhaps that is just what the organization wanted—they have been media darlings since taking on Rex Ryan as head coach and captured their fair share of attention for signing future hall of famer Brett Favre to a one year deal the season prior. It seems only appropriate then, that after 13 weeks of increasingly loquacious pleas for Tebow to replace an underperforming Sanchez that Coach Ryan would finally pull his starter from the game… a game for which Tebow was inactive with two broken ribs and thus intelligible to play.

That Sanchez was pulled from the game was not terribly surprising. To call his season mediocre would be generous; Sunday’s game was no exception. In three quarters of play against the Cardinals he went a paltry 10/21 for 97 yards, no touchdowns, and 3 interceptions in rapid succession.  104 rushing yards courtesy of Shonn Greene gave New York fans a bit of hope, but an equally dismal performance from Arizona QB Ryan Lindley (10/31 for 72 yards, no touchdowns, and an interception) is what kept the game alive.

And so it was, that with fewer than 20 minutes left in the game Greg McElroy would take the reins away from Sanchez in his NFL debut. McElroy only attempted 7 passes, but he completed 5 of them for 29 yards with no interceptions and, most importantly, a touchdown.

One touchdown—that was all the Jets would score, but it would prove sufficient for a 7-6 victory over the floundering Cardinals, pushing New York to 5-7 on the season. Thus begins a new chapter in Gang Green’s quarterback squabble. Rex Ryan will likely continue to tell the press Sanchez is “his guy,” and ESPN will not be liable to cease filling air time with talk about Tebow, but there will be new rumblings in the stands at MetLife Stadium. Cheers of “McElroy” shall be cried, however loudly, in deference to his brief moment of untainted productivity. They’ve already begun.

The season has been much kinder to New York’s other football team, who still sit atop their division after winning last year’s Super Bowl. Monday night, however, did not end well for them.

After trailing 3-7 to the Redskins in the first quarter, a red zone connection between Manning and Bennett combined with a second Tynes Field Goal to put them up 13-10 going into halftime. Tynes would put up another FG in the third for his final kick of the night. 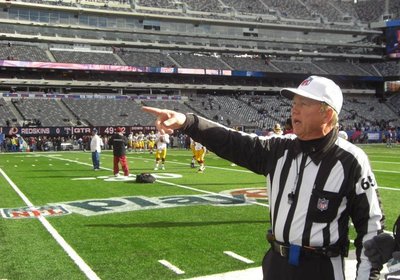 Unfortunately an impressive game from Eli, who went 20/33 for 280 yards and a touchdown, combined with a 103 rushing day for Bradshaw would not prove enough to overpower Robert Griffin III for a second time this season, nor the myriad of penalties Big Blue brought upon themselves throughout the night.

Having failed to put anything on the scoreboard in the third, RG3 threw an 8 yard pass to Pierre Garcon early in the fourth to go up 17-16. Eli could not muster one of his famous fourth quarter comebacks, and the Giants saw their season slip to 7-5.

The Redskins, now 6-6, are tied with the Cowboys for second place and are only a game behind New York in the NFC East. The Eagles, who have had a QB controversy of their own this year, dropped to 3-9 in their loss to Dallas before announcing Nick Foles would take over for the injured Michael Vick for the remainder of the season.

Nets Duke it Out Against Celtics

Boston is a town accustomed to leading the pack and winning a sizeable majority of regular season games when it comes to the NBA. It is not terribly shocking then, that the Celtics (presently 9-8) were feeling a little frustrated while trailing a Nets team which has been traditionally bad in recent years.

What was shocking was the sight of Rajon Rondo attacking Kris Humphries and dragging a fight into the stands at the close of the first half. Both men were ejected from the game alongside Gerald Wallace (who had also been drawn into the scrap) which resulted from Humphries fouling Kevin Garnett. Brook Lopez would be the only one to suffer an injury, but his came in the form of an unrelated right foot sprain in the third quarter. He has not played since.

Despite the brawl, there was still a game to be played—one which resulted in a 95-83 Nets win. Joe Johnson, Andray Blatche, and Jerry Stackhouse did the heavy lifting, scoring 18, 17, and 17 respectively. The Nets and Celtics will meet again at noon on Christmas, though no promises that either team will be particularly jolly can be made.

To the delight of Brooklyn fans, however, the Nets extended their road warrior ways in a trip to Florida. Playing their third of four games against the Magic this season, the team caught fire from beyond the arc. Wallace led the way in three-pointers—of which the Nets went 11/20—en route to a 20 point game with 4 rebounds. Johnson put up 22 with 5 assists as Brooklyn demystified Orlando for the third time in November, 98-86.

The Nets would prove unable to withstand the Florida heat as they travelled to Miami. Though they led by 14 at the half, New York’s newest team would see their lead whither then die as Dwayne Wade racked up a season-high 34 points and LeBron James sunk 21. Miami would win their second of three games against Brooklyn by a score of 102-89.

Having lost the first game against their new crosstown rivals, the once undefeated Knicks set out to reclaim the Atlantic division lead this week.

Their first challenge came from the Milwaukie Bucks, who were handled with ease. Though New York trailed after the first period, a 35 point second and 30 point third insured they would coast to victory. Carmelo Anthony, who sat out the entire fourth quarter, put up 29 points with 8 rebounds. Steve Novak backed him up with 19, while Tyson Chandler strung together 17 and 8 rebounds of his own in a 102-88 win.

The Knicks came home to MSG for a game against the Wizards next, but Washington would prove even less of a challenge.  New York lead every step of the way with Anthony and JR Smith both knocking down 20 in a well-rounded performance. 5 Knicks would score in the double digits, including a double-double from Chandler, as they trounced the Wizards 108-87.

The Suns proved a greater challenge when they came to town. Though Chandler had his second double-double in as many games, Anthony scored 34 points, and Felton had 23, Phoenix made the game much closer than either of the last two for the Knicks. New York came out on top in each of the first three periods, leading 89-72 after three, but would be held to only 17 in the fourth.

Fortunately for the crowd at Madison Square Garden, no Sun could break the 20 point mark which did little to help their cause. Despite a great team effort, they fell 106-99.

With that win, the Knicks now lead their division once more at a record of 12-4. They trail Miami by only half a game in the East, and face Charlotte tomorrow at 7 PM.