A Public Service Commission Report reveals the various ways in which LIPA failed to meet industry standards and upgrade it system to withstand storm damage.

A Public Service Commission report reveals that LIPA’s failures in restoring power in a timely manner following Hurricane Sandy stems from the public utility company’s antiquated system that lacked recent upgrades.  The problem was only compounded by neglected maintenance and under-budgeting for storm response. 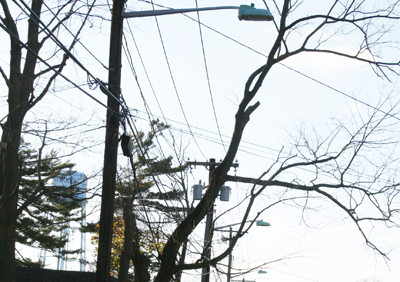 LIPA also failed to meet industry standards, instead favoring handwritten memos in place of smartphones, digital tablets and even fax machines.  Most startlingly, LIPA relied on a 25-year-old mainframe computer to direct the recovery response.
Furthermore, the new outage management system that was contracted for replacement last year was never implemented, according to LIPA’s chief operating officer, Michael Hervey, though he says the most essential features of the system had been put in place.
The report, which was released in June, showed that LIPA, which is run by a board of 15 non-utility professionals, failed to completely fund system upgrades that would effectively harden the system against damaging storms.  Funding fell short by $37.5 million.
Michael Hervey announced this morning that 227,000 customers remained without power.  90,000 new outages were reported following Wednesday’s nor’easter that covered the area in 4 to 8 inches of snow, forced the LIRR to suspend or delay service and resulted in a handful of road closures and car accidents throughout Long Island.
LIPA, which has already been criticized extensively by Gov. Cuomo, as well as state, county and local officials at every level, stands accused of not taking seriously the lessons learned during last year’s Tropical Storm Irene, which the utility company labeled as a “once in a career” storm.
The infrastructure supporting LIPA had not been upgraded to a major extent since Hurricane Gloria, nearly three decades ago.
The state report accuses LIPA of not budgeting for storm-readiness, and according to Newsday, a 2006 report written by a LIPA-contracted consultant suggested a handful of recommended upgrades which were never completed.  LIPA even failed to conduct basic tree-trimming and pole inspections ahead of Sandy.  Road clearing procedures, as well as locating downed wires and communicating with customers, which is considered its largest failure, all went undeveloped by LIPA.  Funding for pole inspections stopped in 2006.  Evidence that LIPA did not review its storm and emergency response policy annually, as it claimed, comes from it’s emergency plan’s response to KeySpan, which was acquired by National Grid in 2008.
Calls to bring LIPA under the jurisdiction of the Public Service Department drew threats from LIPA for a ratings downgrade.  Following a LIPA oversight bill passed in January, LIPA remains free of oversight by the state’s Public Service Department.
National Grid is also accused of using a “rudimentary” model to predict storm damage, and like LIPA, is now coming under strong public and governmental scrutiny.
Share your thoughts on this article by posting your comment below or visiting our Long Island Living discussion forum.