A single-engine, custom plane crashed into the Moriches Inlet just minutes after taking off from nearby Spadaro Airport in East Moriches.

A single-engine, custom plane crashed into Moriches Inlet on Saturday,  killing both the pilot and his passenger.  Witnesses reported that the plane was piloted by Cyril McLavin, 51, of Fresh Meadows, a member of the Long Island chapter of the Experimental Aircraft Chapter, who had recently had his 1946 two-seat Globe Swift GC-1A repaired and inspected.

McLavin took off with his passenger, Andrew Messana, 72, of Bayside, from Spadaro Airport in East Moriches.  Competitors in a local fishing contest witnessed the plane nosedive toward the water. 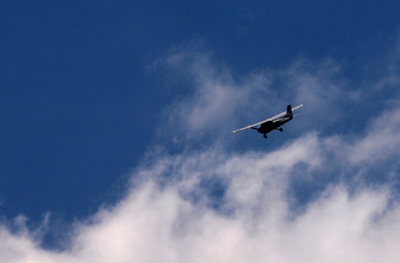 The National Transportation Safety Board, which is now investigating the accident, has said it may take an entire year to uncover the cause of the crash.  McLavin had a valid license for piloting single-engine aircraft, while Messana had a student’s license.  Though the rebuilt plane was McLavin’s first, he was an experienced pilot, with twenty years of flying under his belt.
Following the accident, it took eight hours to pull the aircraft from the inlet where it had sunk to the bottom, under thirty feet of water.  The plane had been highly modified from its original design, and the tail separated from the plane as it fell from the sky.
Share your thoughts on this article by posting your comment below or visiting our Long Island Living discussion forum.