October has been designated Breast Cancer Awareness month.  Back in 1993, Evelyn Lauder of the Estee Lauder Company established the pink ribbon as the symbol of the 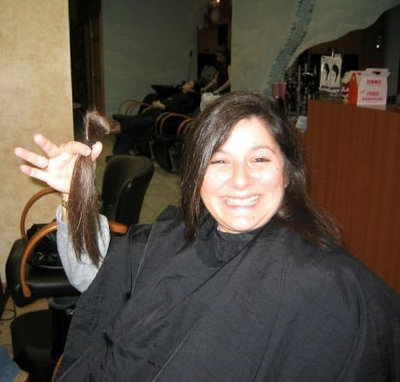 cause.  There are many events throughout the month including world-famous landmarks illuminated in pink light, walks, fundraisers, pink bagels,  NFL players show support by wearing pink gloves, cleats, captains patches, and other apparel during games.  This year there were 50 comic strips that ran on October 10th  using the pink ribbon with the words "Cartoonists Care."

To the women of Long Island, breast cancer is far too common effecting too many of our family and friends.  I personally know young women with young children who have been diagnosed after routine mammograms.  It is very scary for all who know them.

So many women battling the disease lose their hair.  Beautiful Lengths is a partnership between Pantene and the American Cancer Society. When you donate your hair, you are giving a precious gift to a woman in need.   It takes at least 6 ponytails to make one wig.  8" is the minimum donation (measured from just above the elastic band of the ponytail to the ends). I grew my hair a little bit longer and proudly donated 10" to this cause.  I received an amazing thank you letter which really touched me.

A wave of pink is flooding stores everywhere.  Buyers should be on the lookout for a  tag that tells where the money from the purchase goes.  Sadly, Pinktober focuses mostly on early detection and prevention.  They are not acknowledging the late-stage patients and 40,000 women who die each year -- and those living with incurable disease.

It is important to be active and eat healthy in order to reduce the risk cancer.   Breast cancer is a deadly disease that continues to take the lives of too many mothers, sisters, wives, grandmothers, aunts and best friends every year.

Be sure that you get checked regularly, and that the women in your life do as well - this is one of the most simple, straightforward ways that you can fight this disease - by being aware, and fighting back early on.