Whether you’re looking for comedy, dance, karaoke, a relaxing night of movie watching or an amazing performance reflective of great bands, such as the original Pink Floyd, Long Island has it for you.

Whether you’re looking for comedy, dance, karaoke, a relaxing night of movie watching or an amazing performance reflective of great bands, such as the original Pink Floyd, Long 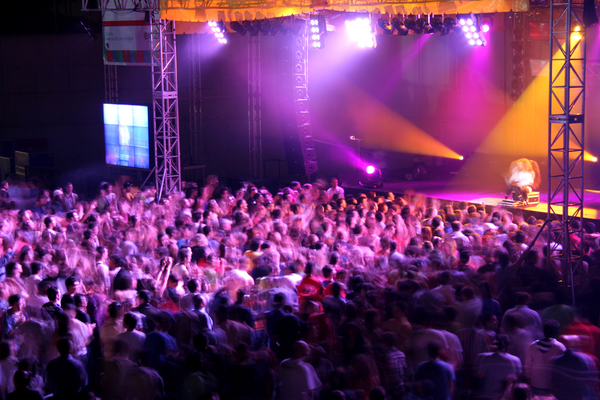 Island has it for you. On Monday, stop by West Babylon Public Library for its movie night screening of Sherlock Holmes: A Game Of Shadows or Connetquot Public Library to hear the story behind the Long Island witchcraft trial of Goody Garlick. On Tuesday, Bay Street Theatre will play on the big screen the presidential debate for a community event with the League of Women Voters of the Hamptons. If you’re looking for more physical entertainment for your Tuesday night, The Winner’s Circle will have mixed ballroom dancing available. On Wednesday, enjoy a night of comedy at the Plaza Cinema & Media Arts Center or an amazing performance at The Paramount with the Australian Pink Floyd band. For Thursday, it’s karaoke night at Medley’s or you can enjoy music at The Paramount where the Long Island Music Hall of Fame 4th Induction Awards Gala will be hosted. Check out the details below!

Who: The Long Island Witchcraft Trial of Goody Garlick
Info: Witchcraft may be viewed as mythological to many today, but back in 1657 an East Hampton resident by the name of Goody Garlick was accused of witchcraft by a neighbor. Tara Rider, a Stony Brook University lecturer tells the story behind the case with Good Garlick.
Cost: Free Event
Time & Place: 7PM to 8:30PM at Connetquot Public Library, 760 Ocean Avenue, Bohemia – (631) 567-5079

Who: Presidential Debate & Election Night Coverage On The Big Screen
Info: Join the League of Women Voters of the Hamptons in this community event where the presidential debate is available for viewing on the big screen at the Bay Street Theatre. The lobby bar will also be open for refreshments.
Cost: Free Event
Time & Place: 8PM Door Opens; 9PM Debate Begins at Bay Street Theatre, at corner of Bay and Main Streets, Sag Harbor – (631) 725-0818

Who: Dancing After Dark At The Winner’s Circle
Info: Enjoy a night of mixed ballroom dancing with DJ Chris, formerly of IBBG. There will also be music by DJ Tony Felix. Enjoy hustle dancing, West coast swing, salsa, the cha-cha and more. Drinks are also half price from 7PM to 8PM.
Cost: $10
Time & Place: 7PM to 12AM at The Winner’s Circle, 39 Post Avenue, Westbury – (516) 997-4050

Who: Comedy At The Plaza Cinema & Media Arts Center
Info: Enjoy a full night of laughing with stand-up comedian acts by performers from the Wilshire Comedy Group. Its lead act will be Harry Freedman, whose written comedy for Carolines Comedy Hour and has appeared on “Everybody Loves Raymond” and “Men of a Certain Age.” Other performers include John Santo, Marc Herschmann, Eddie Faicco and Ken Krinsky as a Rodney Dangerfield impersonator. The event is hosted by Allen Streisfeld.
Cost: $12 Admission
Time & Place: 7PM to 9PM at The Plaza Cinema & Media Arts Center, 20 Terry Street, Patchogue – (631) 438-0083

Who: The Australian Pink Floyd Show At The Paramount
Info: The Australian Pink Floyd Show has performed in 35 countries and has sold over 3 million tickets. Its been recognized as the only Floyd tribute band to offer an authentic performance to recreate the sounds and acts of the original Pink Floyd band. They’re so good that David Gilmour, a member of Pink Floyd, asked the band to perform at his 50th birthday party. Don’t miss out on an amazing show!
Cost: $35 to $69.50
Time & Place: 8PM at The Paramount, 370 New York Avenue, Huntington – (631) 673-7300

Who: Long Island Music Hall Of Fame 4th Induction Awards Gala At The Paramount
Info: This event goes to benefit the LI Music Hall of Fame. It’ll include performances featuring Felix Cavalieri of The Rascals and previous inductee Gary U.S. Bonds with a musical tribute to Ellie Greenwich. Other performances include Dee Does Broadway, The Lovin Spoonful, Taylor Dayne and other special guests. The event seeks to celebrate and preserve future generations of musical talent.
Cost: $50 to $75 (includes food)
Time & Place: 8PM at The Paramount, 370 New York Avenue, Huntington – (631) 673-7300