After weeks of outcry from Assemblyman Todd Kaminsky and affected community members, National Grid has agreed to discontinue charging superstorm Sandy victims who are demolishing or elevating their houses for disconnecting and reconnecting their natural ... 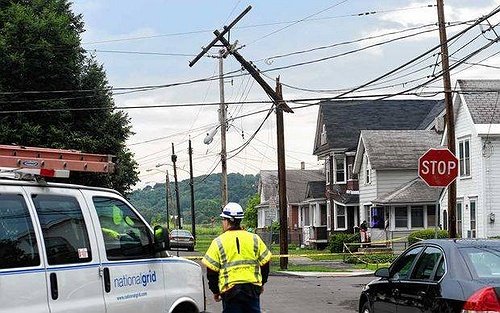 South Shore, NY - September 10, 2015 - After weeks of outcry from Assemblyman Todd Kaminsky and affected community members, National Grid has agreed to discontinue charging superstorm Sandy victims who are demolishing or elevating their houses for disconnecting and reconnecting their natural gas lines.

Until June 15, 2015, National Grid waived gas service line alteration fees and associated reconnection fees for Sandy-damaged homes.  Then, this summer, owners of those homes began receiving bills for $700 to disconnect their gas. In some cases, others who were ready to reconnect their gas lines were charged more than $2,000. Many affected residents struggling through the lengthy and costly processes of elevation and demolition could not afford the new fee and reached out to Assemblyman Kaminsky for help.

After writing to National Grid on August 21 to advocate for homeowners, Kaminsky announced on September 3 that he would hold a rally at National Grid’s Island Park location to protest the new fees, which impacted storm victims in his district and throughout the region. Following the announcement of the rally, Kaminsky began discussions with National Grid President Ken Daly, urging that the policy be reversed. Today, National Grid officially agreed to once again waive the fees for Sandy victims.

“I am very pleased that National Grid will discontinue charging storm victims and fund the costs associated with these required infrastructure improvements,” said Assemblyman Kaminsky. “Storm victims have been through so much—an additional charge, which would have cost already beleaguered families thousands of dollars, was the last thing that they needed. I applaud National Grid for responding to the public and doing what is right for those in our region still trying to rebuild. I also thank Legislator Denise Ford and Mayor McGinty for her hard work on this issue.  I am proud of the people of my district who stood firmly to support their neighbors. Once again, we saw the strength of the resolve of Long Islanders win the day.”

“We wanted to do everything we could to continue assisting customers that owned their home when Sandy hit, and who are just now in the process of rebuilding their homes after receiving New York Rising and Build It Back grants,” said Mike Ruiz, Director of Community and Customer Management at National Grid. “By working with local officials such as Assemblyman Todd Kaminsky (D-Long Beach), we made the decision to continue to suspend recovery of the costs associated with connecting services to homeowners who are now in a position to rebuild their homes nearly three years after the devastating event.”

“I lost a great deal from superstorm Sandy and it would have cost me almost $2,300 to reconnect my gas,” said Emma Willi, an Island Park resident. “I am so thankful for Assemblyman Kaminsky’s work on this issue—he was instrumental in bringing about this change. I also thank National Grid for changing its policy in order to help homeowners like myself who have already been through so much.”

In a statement, National Grid said it “will continue to temporarily suspend its recovery of costs to disconnect and reconnect natural gas facilities through March 31, 2016 to accommodate the reconstruction activities of current New York Rising and Build It Back grantees and other Sandy-affected customers in the service relocation process. Going forward, the company will work with customers and officials to determine whether these costs are recoverable through storm reconstruction programs.”  There will also be a procedure for homeowners who already paid these fees to be reimbursed by National Grid.