A look at the new biographical drama opening in theaters today about US Airways pilot Chesley "Sully" Sullenberger. 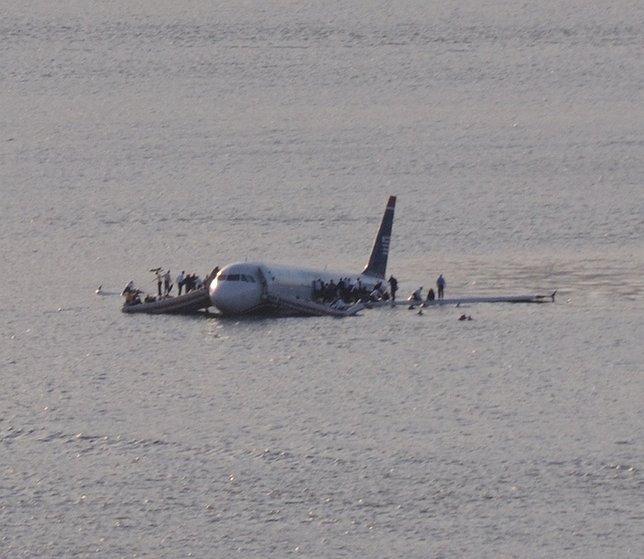 US Airways Flight 1549 after crashing into the Hudson River

Photo by: Greg L via Wikimedia Commons under CC BY 2.0

I could be wrong – I consulted my in-house expert, Google about it – but Sully, the biographical drama opening in theaters today about famed US Airways pilot Captain Chesley "Sully" Sullenberger marks the very first pairing of director Clint Eastwood and actor Tom Hanks. If correct, I find it hard to wrap my brain around the fact that it’s taken this long for these two immensely talented people to finally collaborate on a film project, but in the end, the long wait is worth it.

I’m sure many of you reading this may be already familiar with the story that inspired Sully – on January 15, 2009, three minutes after taking off from New York’s LaGuardia Airport, the dual engines of US Airways Flight 1549 were massively damaged when a flock of geese had the misfortune of flying directly into them. Sullenberger, relying on his years of experience behind the stick, determined that his plane was too crippled to make it to any neighboring airfields and, fearing for his life and the lives of his passengers, instead dumped the plane into the Hudson River while deftly avoiding plowing into any nearby buildings.

Miraculously, all passengers and crew – 155 in total – survive the water landing, and Sullenberger was subsequently hailed as a hero by no less than U.S. President George W. Bush and President-elect Barack Obama. However, he later found himself the subject of an investigation into his actions, as the airline’s insurance company question Sullenberger’s judgment- could he, in fact, have safely landed his aircraft on land, avoiding a great big payout on the part of said insurance company?

If you’re familiar with the history of this story, Sully will hold few surprises for you; things progress on film pretty much as they did in real-life, which is a breath of fresh air compared to most Hollywood films “inspired by a true story.” Eastwood’s film is presented out-of-sequence, opening with the crash already having occurred and the investigation of Sullenberger (played by Hanks) and his co-pilot, Jeff Skiles (Aaron Eckhart) already underway. We are then, throughout Sully’s runtime, taken back and forth in time between villainous men and women in suits asking questions, listening to flight recorders, and examining other evidence, and Sullenberger’s personal flashbacks to the events leading up to the crash. After drawing things out as long as possible, Eastwood finally shows us the fabled incident – from two entirely different perspectives – and the way he does so is incredibly effective at establishing the horrific situation Flight 1549 faced on that frigid winter day.

During the course of the investigation, Sullenberger does the rounds on the interview circuit with television hosts such as David Letterman and Katie Couric as a way of helping to get the public on his side, despite being very uncomfortable with the ‘hero’ label. We’re also given more intimate glimpses into his personal life, such as his interactions with his wife (Laura Linney) and a fun scene involving a bartender (Michael Rapaport) who happens to be a big fan of Sullenberger’s.

Of course, this all leads up to the big hearing scene, where Hanks, in his usual full-on “good guy” mode (which has, shockingly enough, not worn thin throughout the years) gives an impassioned speech defending his judgment – after all, he ignored radio messages from air traffic control assuring him he could make it safely back to the runway, believing full well he really couldn’t – which is really the only aspect of the movie that comes across as being a bit cheesy and forced. But otherwise, Sully is an engrossing and fascinating look at a man forced to rely on his instinct and experience when faced with insurmountable odds.

Two things really stand out about Sully: Eastwood’s direction and Hank’s performance. Eastwood does a great job of presenting a story that juggles procedural, investigative scenes with emotional ones, and then it come to the one scene we all paid to see – the crash – he doesn’t shy away from showing us an extensive and accurate re-creation that really drives home how close these people all came to actually dying that January day. Hanks, meanwhile, always brings his ‘A’ game, and he’s backed by a solid cast that, when combined, really do equal more than the sum of their parts. As a result, Sully is a film that offers a fascinating glimpse into a modern near-tragedy and the life of a reluctant hero that is worth your hard-earned dollars this weekend.