The Breakthrough Prize in Fundamental Physics recognizes individuals who have made profound contributions to human knowledge and is open to all physicists working on the deepest mysteries of the Universe. 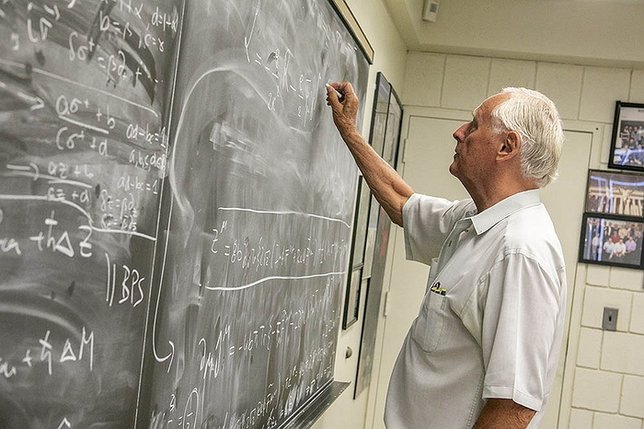 Stony Brook University professor Dr. Peter van Nieuwenhuizen and two colleagues are being recognized for their work developing the theory of quantum physics called supergravity more than 40 years after they published their findings.

In 1976, the models included three of the four forces but there was no theory that encompassed gravity, until Dr. van Nieuwenhuizen teamed up with Daniel Freedman (who was also working at Stony Brook University at the time) and Sergio Ferrara to work it all out using the best computing power available over 40 years ago.

“The discovery of supergravity was the beginning of including quantum variables in describing the dynamics of spacetime,” said Edward Witten, the chair of the Selection Committee. “It is quite striking that Einstein’s equations admit the generalization that we know as supergravity.”

Previous winners of the Breakthrough Prize in Fundamental Physics include Stephen Hawking, seven CERN scientists whose leadership led to the discovery of the Higgs boson, the entire LIGO collaboration that detected gravitational waves, and, last year, Dame Jocelyn Bell Burnell for her discovery of pulsars.

Ironically, Dr. van Nieuwenhuizen said he was sitting at his kitchen table paying bills when the message came in that he won the $3 million prize.

He explained that he was working at Stony Brook University for about a year when he and his associates made the initial discovery. He had offers to leave Stony Brook but decided to stay after which he was given the title of Leading Professor, and later, Distinguished Professor. He said that staying was a wise decision.

“The main reason I like to be here is the advanced graduate courses I teach; the students are absolutely fascinated with these courses, and that motivates one a lot,” he said in an interview on the Stony Brook University website. “It’s very rewarding to have such an audience that wants to learn from you.”

He currently has no plans for the prize money but it should make paying bills a little easier.

“It’s a surprising amount of money. I haven’t thought about it, because I didn’t even think we would get the prize,” he said. “Fortunately, that is not a problem I have to solve immediately.”