On August 2nd, 3rd, and 4th, LongIsland.com had the privilege of being part of Sayville’s 33rd Annual Summerfest orchestrated by the Sayville Chamber of Commerce in Gillette Park and by Main Street. 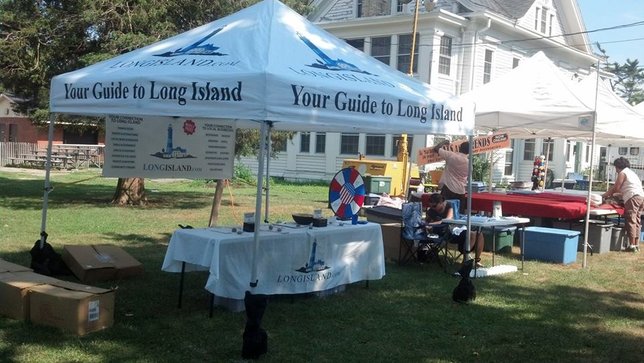 On August 2nd, 3rd, and 4th, LongIsland.com had the privilege of being part of Sayville’s 33rd Annual Summerfest orchestrated by the Sayville Chamber of Commerce in Gillette Park and by Main Street. From Friday night through Sunday night, Long Island residence and visitors enjoyed many different activities and events held throughout the weekend.

Starting Friday night, a carnival with many attractions lit up the night. The carnival included games and face painting. Next to the attractions were many incredible food vendors. From fresh corn-on-the-cob to waffles on a stick, visitors had plenty to eat as they played and shopped.

Through the rest of the weekend, clothing and craft vendors took up the streets selling handmade clothing, toys, and other merchandise. As people shopped, live music was played throughout the park and the streets by different musicians. LongIsland.com was also there with our new tent by the food and attractions.

Saturday morning, the fair was location for John P. Cohalan 4 Mile Run & Fun Run, part of the Sayville Summer Series, where there was a record breaking number of registered runner in comparison to the previous years. Sunday’s major feature was the classic car show that took up multiple parking lots and streets.

Sayville Summerfest is always a must-see fair on the island. If you did not go to this year, the 34th annual Summerfest should be on your summer schedule next year.


Check out all of the great photos here, in our 2013 Sayville Summerfest Photo Album!

Have a photo you'd like to share?
Email it to us at Photos@LongIsland.com, and we'll be sure to add it to the album!