Chris Bodkin has dedicated his career to helping the community and many local organizations. 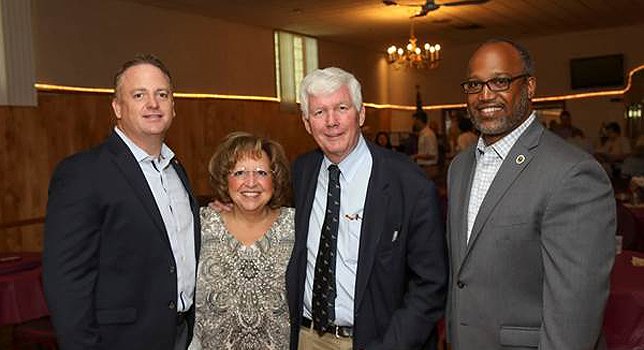 Sayville, NY - June 20, 2017 - The Sayville Historical Society and all 18 Suffolk County Legislators honored Chris Bodkin for his life-long service to the residents of Suffolk County this past weekend. Chris Bodkin has dedicated his career to helping the community and many local organizations and is being recognized for his quick nature to assist in constituent services and for guiding the County in community based issues. One such issue that Chris dedicated himself to was adding the names of Vietnam and Afghan War Veterans to the Sparrow Park Memorial in Sayville, which greatly benefitted local Veterans.
Most notably, Chris Bodkin operated as Deputy Supervisor of the Town of Islip and as an Islip Town Councilman for over 15 years. During this period he acted as a member of the Islip Industrial Administrative Board, The Islip Resource Recovery Board, and the Islip Empire Zone Administrative Board. Furthermore, he served under Presiding Officer Lindsay and Presiding Officer Horsley, and currently serves as a Legislative Aide to Presiding Officer DuWayne Gregory.
“Chris has been a friend and mentor to me for so many years” said Legis. Lindsay. “He has managed to guide this County and its residents for decades and for that and all he continues to do; we all truly owe him our sincere gratitude”.
Suffolk County Legislator Bill Lindsay is the Chairman of the Economic Development Committee, Vice Chairman of the Parks & Recreation Committee, and Vice Chairman of the Government Operations, Personnel, Information Technology, and Housing Committee. Bill represents the 8th legislative district which consists of Bayport, Blue Point, Bohemia, Holbrook, Holtsville, Oakdale, Sayville, West Sayville parts of North Patchogue and Ronkonkoma.