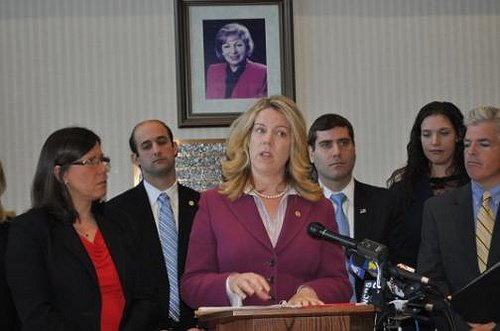 Hauppauge, NY, March 24, 2015 - Standing just opposite from Suffolk County’s Domestic Violence Commemorative Tree, Legislator Kara Hahn, County Executive Steve Bellone and advocates, today called on lawmakers to approve a bill that will give the police new tools for differentiating risk and educating victims of domestic violence on the likelihood of repeated violence.  Legislators will vote on the measure this evening during the body’s general session.
Using a multi-dimensional approach, the resolution sponsored by Legislator Hahn will direct the County police to implement a highly regarded risk assessment model to objectively evaluate continued risk to victims from their abusers. At the same time, police will provide victims with a second danger assessment tool designed to raise their awareness of their risk of being abused again at the hands of an individual who may have already abused them at least once.  Advocates will play a key role in this multi-dimensional approach.
In its previous, limited use by the Suffolk County Police Department, the Portland Police Bureau’s Risk Assessment for Intimate Partner Violence proved to be highly accurate in identifying offenders who are likely to recommit acts of domestic violence against their partners.   Police will also be charged with providing each victim of domestic violence with a separate self-administered Danger Assessment.  Victims will be encouraged to use the 20 question test to determine the level of danger to them of being killed by an intimate partner.  Additionally, the assessment will include referrals to domestic violence victim services and agencies that can provide guidance, counseling on partner abuse and resources, such as referral to domestic violence shelters.
“One out of four women in the United States will experience some type of domestic violence during her lifetime, and every year more than 1,500 of these women will be killed by their abusers. Key to addressing this issue is to realize that over half of domestic violence victims who are murdered or are the victim of an attempted murder by an abuser did not accurately perceive his or her risk,” said Legislator Hahn.   “I am confident that use of this Danger Assessment test, coupled with law enforcement's efforts, will help prevent victims of domestic violence from becoming victims of homicide.”
To create continuity between the police and domestic violence service organizations on this policy, the legislation also requires agencies that receive County funding to become certified in the use of the Danger Assessment instrument.  This tool was developed by noted domestic abuse educator and researcher Dr. Jacquelyn Campbell, who for more than 25 years has worked closely with law enforcement agencies, healthcare professionals, and domestic violence advocates to identify victims with the highest level of danger of being re-abused or killed.
“One in four women will experience domestic violence during their lifetime," said County Executive Steve Bellone.  "As the police are some of the first people to come into contact with victims of domestic violence, it is important that they have access to proven assessment tools and the most effective resources to best serve and protect victims.  This legislation will do just that."
Laura Ahearn, Executive Director of the Crime Victim Center at PFML said that "Emerging evidence demonstrates that domestic violence homicide is predictable and preventable, and this legislation is a comprehensive step forward to provide victims of domestic violence vital information that will help them accurately perceive the grave risk they may be facing in their current circumstances. I applaud Legislator Hahn for her leadership in spearheading this important legislation and for her successful collaboration with the County Executive, the Suffolk Police Department and Crime Victim Services agencies."
According to Sergeant Kelly Lynch, Commanding Officer of the Suffolk County Police Department’s Domestic Violence Bureau, “The Suffolk County Police Department has evaluated the use of various intimate partner domestic violence risk assessments and has determined that the Portland Police Department model can be effectively implemented in our jurisdiction. This computer program automatically collects and analyzes data from internal police records and produces a score that will identify offenders who are most likely to recidivate in domestic violence offenses.   Domestic violence officers will use this tool to contact the victims and families who are associated with these high risk offenders. These victims will be provided with pertinent information regarding their high risk and referred to domestic violence agencies for further outreach services.”
“It has been my experience that victims of domestic violence tend to underestimate their level of risk.  Tools and programs aimed at helping victims of domestic violence gain an un-biased awareness of their risk for repeated injury can actually help to prevent violence,” concluded Colleen Merlo, Executive Director of Suffolk County Coalition Against Domestic Violence.  “Risk assessments can assist the victim to develop a realistic safety plan and make informed decisions about their situation.”
The bill now goes to County Executive Steve Bellone for his signature.