What's Brewing in NY? Farm Breweries - What Your Need to Know About NY's Beer Movement 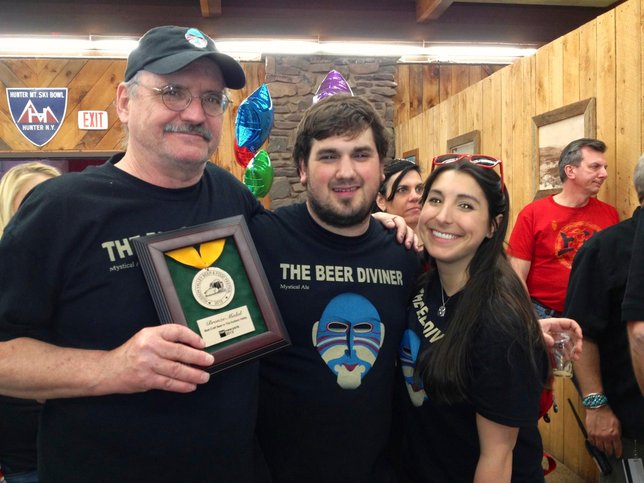 If you're a craft beer fanatic or a political junkie, you probably heard about the new farm brewery law that passed last year. This law does a lot of neat things for small brewers, many of whom are already using locally-sourced ingredients. The trend is on the upswing, and craft beer drinkers in New York will soon be able to try dozens of unique farm-brewed beers from breweries opening up all over the state. Representing The Beer Diviner, one of the only current operating farm breweries in New York, I am coming to Long Island bearing gifts of farm brewed beer. Here is some background.

What is a Farm Brewery?
Last year, the New York State legislature voted to create a new brewing license. Modeled after the farm distillery and farm winery licenses, this one is targeted at brewers and is designed to incentivize the use of local hops and grains in the production of beer. Under the new law, a farm brewery is any one that is using New York State-grown hops and grains as 20% of its ingredients. This also includes miscellaneous fermentables, such as local honey. Over the next two decades, that number will increase to 60% and 90%. Here’s to hoping that the farmers grow as fast as the breweries do!

What are the benefits to operating as a Farm Brewery?
Well, for starters, the license is cheaper. Additionally, the law allows for some unique opportunities. The farm brewery can also own and operate up to five retail outlets, where it is possible to do samplings of other farm brewed beer, as well as New York State wine and liquor. These outlets, in addition to the brewery itself, will serve as a catalyst to and promote craft beer tourism, much in the way that wineries have become destinations onto themselves. The law makes marketing easier for small breweries, in the hopes that they may better compete on their home turf with corporate breweries.

Why should I drink (or even try) Farm-Brewed beer?
The collaboration between farmers and brewers to provide and use New York State ingredients means a fresher and more artisanal product for the consumer. Our state’s farmers are growing and harvesting some of the finest ingredients in the country, and the proof is very much apparent in the quality of the beers that farm brewers are so far producing. At TAP NY last month, two farm breweries made their very first appearances: The Beer Diviner, from Cherry Plain, and Good Nature Brewing, from Hamilton. Both of these tiny upstate breweries went up against some of the most established (and beloved) breweries in the state. Good Nature won Best IPA, and The Beer Diviner left with a bronze for best beer in the Hudson Valley. What goes into the product matters, and farm brewed beer is excellent.

Okay, I’m sold. But where the heck am I going to get farm brewed beer on Long Island?
I’m certainly glad you asked! As of yet, there are not any farm breweries on Long Island. That will change in the coming months and years, as breweries that are in the planning stages open and apply for their farm brewery license. Have no fear, however! Your brothers in brewing from the great northland (i.e. Albany) will be in town this weekend to give Long Islanders a chance to try to very best in farm-brewed beer. On Friday, I’ll be at Bellport Cold Beer & Soda doing a sampling of Beer Diviner beers, and there will be bottles for sale to bring home and show all your friends, as well.

Greg Back is a brewer, blogger, and adventurous spirit hailing from Albany. His pint-by-pint quest across the state continues as he seeks to visit every brewery in New York. He has returned to Long Island for Bay Fest at the Great South Bay Brewery, and he also hopes to visit a few new breweries, brewpubs, and bars on the journey. Follow him at inthenameofbeer.com, on twitter @inthenameofbeer, and at facebook.com/newyorkcraftbeer.