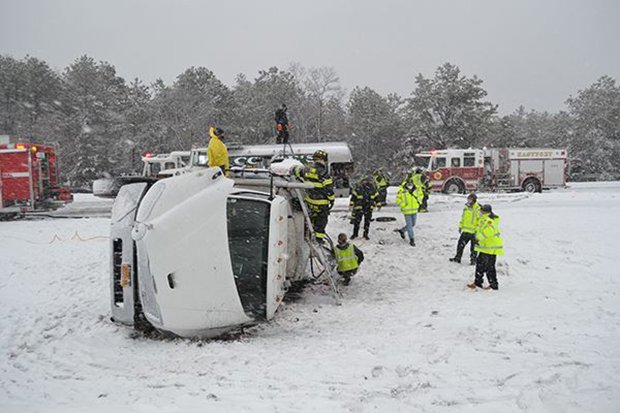 On Super Bowl Sunday, while most Long Islanders were preparing to watch Tom Brady add another to his collection of championship rings, first responders were dealing with a fuel oil truck that overturned on Sunrise Highway.

Eastport Fire Department and Brookhaven Town Fire Marshals responded to the incident and discovered the delivery truck had overturned and came to rest in the median between eastbound Sunrise Highway and the Service Road.

According to a report by Brookhaven Town, Eastport Chief of Department John Rankin sized up the situation and determined the tank was actively leaking from two locations. Firefighters began to control the leaks with their own equipment while Chief Rankin requested the Town of Brookhaven Fire Marshal’s Hazardous Material Response Team respond to assist.

Around 3,800 gallons of home heating oil still remained in the tank and would need to be off loaded prior to the truck being up-righted and removed. Fire Marshals drilled into the tank and used special pumps to transfer the fuel oil to a nearby tanker truck.

“The operation took approximately four hours to complete because the weather conditions were not favorable for this type of operation,” said Chief Fire Marshal Christopher Mehrman. “The incident occurred in the middle of the snowstorm and freezing conditions made working on top of the tank extremely slippery.”

The New York State Department of Environmental Conservation was also on scene.

The driver of the truck was treated and transported to a local hospital with nonlife-threatening injuries by East Moriches Volunteer Ambulance Corp.