New York State has one of the largest air monitoring networks in the country, working to ensure air quality meets USEPA standards. 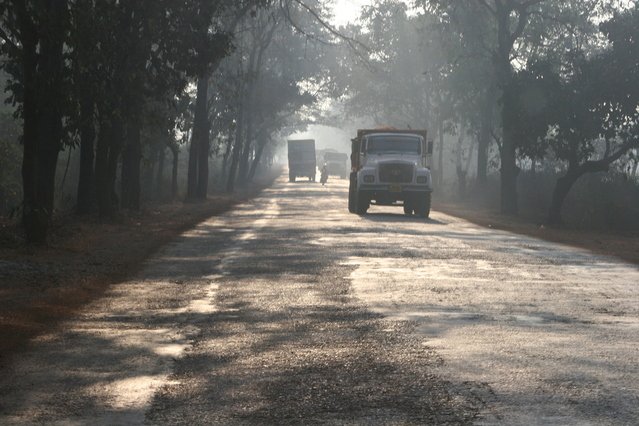 "Air quality is essential for healthy communities, and DEC is deeply committed to ensuring that all New Yorkers, especially residents of environmental justice communities like Albany's South End, have clean air to breathe," said DEC Commissioner Basil Seggos. "However, many communities are burdened on a daily basis by emissions from passenger cars and heavy duty trucks, and we are calling on EPA to improve air emission and fuel standards to better protect public health and the environment."

New York State has one of the largest air monitoring networks in the country, working to ensure air quality meets USEPA standards. Through this effort, the state has identified elevated levels of benzene and toxic pollutants from cars and trucks across the state, and unhealthy levels of ozone downstate. USEPA sets national ambient air quality standards and has primary authority over regulation of motor vehicle emissions and fuel composition-and the state is urging USEPA to move more aggressively to address the concerns of residents of South Albany and other communities located near busy highways or adjacent to industrial zones regarding levels of ozone, particulate matter and benzene in the air they breathe. While the recent new fuel economy standards for heavy duty trucks announced by the Obama Administration are a step forward, this only addresses Carbon Dioxide emissions and not the additional pollutants of concern outlined in DEC's letter to USEPA.

The $500,000 DEC environmental improvement program investment will include air monitoring to evaluate the impact of diesel emissions on Albany's South End. Additional program elements will be developed with community stakeholder input. This will be in addition to a $145,000 Environmental Benefit Project secured by DEC through an enforcement effort against Buckeye Albany Terminal, LLC.

DEC has remained focused on addressing air quality concerns in Albany's South End neighborhood. In March 2015, DEC added an ambient air monitor for toxics in the vicinity of the port to its statewide air toxics monitoring program. This monitor, located on South Pearl Street, records levels of various toxic pollutants, including benzene, formaldehyde and other pollutants associated with mobile sources and industrial activities, including facilities that handle petroleum products. In addition, in 2015 the state began a systematic air monitoring study for hydrogen sulfide in the Port of Albany to determine if hydrogen sulfide emissions were exceeded anywhere in the port.

Just this week, DEC operated another in a series of ongoing diesel truck checkpoints on Route 32 in Albany's South End to ensure tailpipe emissions from diesel trucks comply with state and federal environmental laws and regulations. DEC Environmental Police Officers performed approximately 400 visual inspections at both stationary air quality check points and on roving patrols of Albany's South End as part of Operation Eco-Quality. Officers monitored for Heavy Duty Diesel Vehicles (HDDVs) in violation of air quality, safety, and other laws, as wells as for pollution caused by idling. Air quality inspections were performed on more than 20 HDDVs using mobile air monitoring equipment with two tickets being issued.

These inspections build on DEC's aggressive approach to identify and crack down on air pollution to improve air quality and protect public health in this community. Since November, DEC has conducted over 63 truck pull-over events, including two in Albany's South End, specifically to look for harmful pollutants from these vehicles. In addition, DEC staff test trucks during routine patrols around the state. DEC will conduct additional unannounced inspections in the coming weeks to ensure polluters are held accountable, as well as work with small businesses to ensure they are complying with environmental laws and regulations.

"I applaud Governor Cuomo and the Department of Environmental Conservation (DEC) for maintaining their commitment to address the air quality concerns raised by concerned citizens in Albany's South End, in particular the Ezra Prentice Homes. Every New Yorker deserves to live in a community that is healthy and free from environmental hazards. Ensuring that Albany's South End and all communities meet the United States Environmental Protection Agencies stringent air quality standards is essential to this effort," said New York State Senator Neil Breslin.

"I appreciate the ongoing support of DEC and Commissioner Seggos as well as Governor Cuomo when it comes to the concerns of air contamination when it comes to the residents of the South End of Albany which I have the privilege to represent," said Assemblyman John McDonald. "The investment of $500,000 in EPF funds which we approved in this past year's budget is yet another indication of the ongoing commitment of the state as it relates to the concerns of the residents that we have heard over the years. I am confident that the resources dedicated in the past, today and tomorrow will improve the quality of life for the residents in the South End of Albany and beyond."

City of Albany Mayor Kathy Sheehan said, "The DEC's commitment to air monitoring is an important step forward in our efforts to ensure the safety and health of South End residents, particularly those living at Ezra Prentiss," said Albany Mayor Kathy Sheehan. "We need this information to determine the causes of air quality concerns and the steps we need to take to address those findings."

"It is a fundamental right that South End residents have access to one of our greatest necessities as human beings...clean air. I appreciate DEC for being responsive to community concerns regarding health risks associated with breathing harmful air pollutants such as benzene and NOx on a daily basis. The $500,000 committed by DEC is in investment in a critical air quality study but most importantly an investment in the future of our children and families," said Dr. Dorcey Applyrs, Common Council Member, First Ward.

"I am pleased that DEC is listening to the concerns that the residents of Albany's South End have regarding air monitoring and are acting on them," said Hon. Vivian Kornegay, Common Council Member, Second Ward.

Operation Eco-Quality, which was initiated in 2010, uses a community-centered approach to address air quality issues. The program was developed to prevent pollution that impacts community health. It combines enhanced outreach, consultation and community policing activities to prevent pollution and improve the quality of life in economically disadvantaged communities.

DEC encourages the community to report nuisance odors emanating from the Port on its 24-hour, toll-free odor hotline number for Albany and Rensselaer. In response to complaints, DEC will use portable air monitoring equipment to conduct on-the-spot air quality inspections to assess the odor issues and help identify the cause. To report air quality issues, residents can call 1-800-457-7362.