Governor Cuomo Announces Over 4,000 Toys and Coats Distributed Across the State in Three Days This Holiday Season 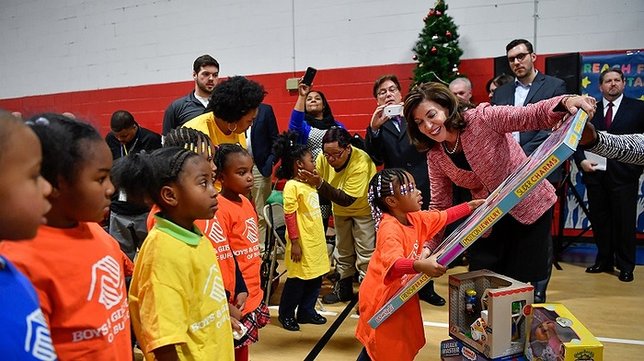 Albany, NY - December 29, 2016 - Governor Andrew M. Cuomo today announced the results of holiday toy and coat distributions that took place across the state December 21 – 23, 2016. Members of the Governor’s administration participated in volunteer events held at 18 organizations statewide to distribute 4,065 toys, coats and school supplies to communities in need. Volunteers from Film Good / Do Good, a joint partnership between the Governor’s Office of Motion Picture and Television Development and the New York State Commission on National and Community Service, also participated in collecting and sorting donations. 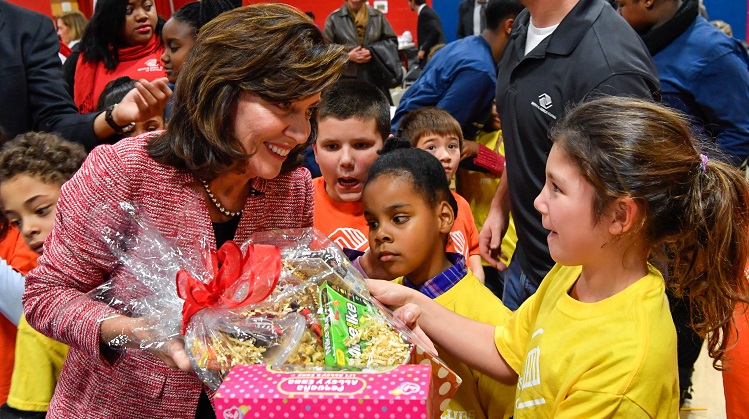 “New Yorkers always help those in need, and I’m proud that this administration has continued a great tradition of helping make the holidays brighter for thousands of deserving children and families across the state,” Governor Cuomo said. “I thank those who donated and helped to deliver these gifts and wish everyone a happy and prosperous New Year.”

A number of New York State agencies and organizations collected new unwrapped toys, coats and school supplies from Friday, December 2 to Friday, December 16. Donations, provided by businesses and individuals, were brought to drop-off locations across the state and collected by organizations at holiday gatherings ahead of the distribution events. The New York State Office of General Services, Department of Transportation and Division of Military and Naval Affairs, with support from other agencies, then delivered the more than 4,000 items to distribution locations in each region.

Film Good / Do Good, the first and only state government-organized community give back program in the nation, also participated in this year’s holiday toy drive. A number of New York-based TV Series placed drop-off boxes on soundstages to collect donations, including Marvel’s The Defenders; Orange is the New Black; Law and Order SVU; Sesame Street; Madame Secretary; Bull; and The Americans.

In addition, members of the Producers Guild of America volunteered to sort through donations that were collected at drop-off locations around the state. The Film Good / Do Good program is tailored specifically to the film and television industry and encourages cast and crewmembers to volunteer at non-profit organizations that are fighting hunger, homelessness and other root causes of poverty in some of the state’s neediest neighborhoods.

The total number of toys, coats and school supplies distributed in each region include:

Film Good / Do Good is a joint partnership between the Governor’s Office of Motion Picture and Television Development and the New York State Commission on National and Community Service, which focuses on using volunteerism to combat poverty. It is funded in part by a grant from the Corporation for National and Community Service in Washington. The program taps the power of New York’s booming, multi-billion-dollar production industry to make a difference in the lives of those less fortunate. The presence of the entertainment industry at volunteer sites inspires other New Yorkers to donate their time and talent to the anti-poverty cause.